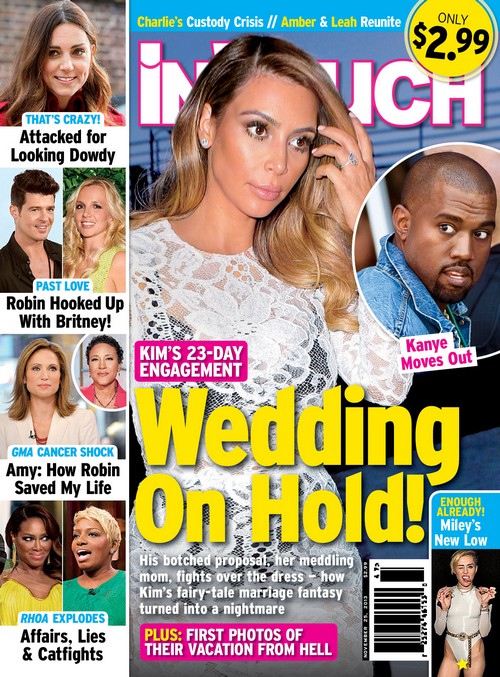 Just weeks after getting engaged, are Kim Kardashian and Kanye West already living apart? That’s what the latest cover issue of In Touch Weekly insinuates, claiming that Kanye and Kim have decided to live apart for now.

According to the report, things have gotten so bad that they’ve even put their wedding on hold. Apparently, Kanye’s botched proposal, fights over Kim’s wedding dress, and Kris Jenner‘s meddlesome behavior have all served to drive a wedge between Kim and Kanye, and they haven’t been able to recover.

While their home is still under construction, Kanye has moved into his own bachelor pad in the Hollywood Hills while Kim stays with North West at her mother’s Calabasas home.

Jeesh. We already know that Kanye’s barely in Los Angeles, but not even spending the few days he has in the city with his own daughter and fiance? That’s harsh. Even if he and Kim end up cancelling the wedding permanently, he still has a daughter with Kim and he should remember that. It’s not like Kim’s any good at being a mother, and with these two as parents, I already feel sorry for poor little North. She’s going to have an…. interesting childhood.

In Touch also has a story focusing on Robin Thicke‘s hookup with Britney Spears in the early 2000s, claiming that he’s always been a philandering cheater – considering he was with soon-to-be wife Paula Patton at the time.

Also, Kate Middleton is apparently getting attacked by fashion critics in the UK for ‘looking dowdy’. Come on, the woman just became a mother – she has a right to dress down every once in a while. She’s probably exhausted from looking after Prince George and catering to the whims of the crazy royals.