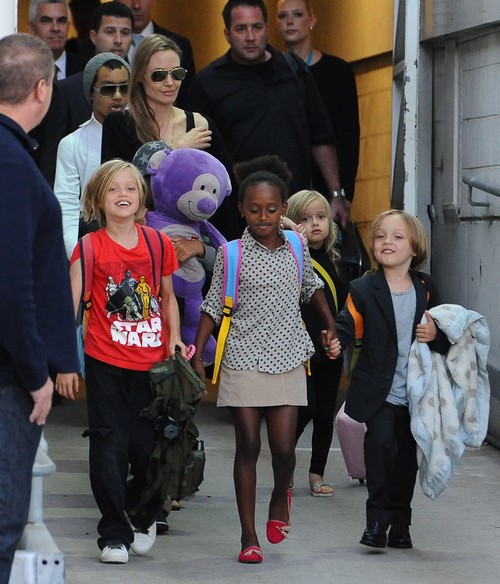 Are Brad Pitt and Angelina Jolie trying to use their fame and status to help their son, Maddox Jolie-Pitt, become an actor?

According to a report from Radar Online, Brad is fully involved in helping Maddox land the role of Battling Boy, the main character in a graphic novel which was picked up by Paramount in a bid to turn it into a major Hollywood franchise. Can you imagine, Maddox Jolie-Pitt, action star? He certainly wouldn’t be the first member of the family to become an action star, considering that both his mother and father are two of the most famous action stars around the world.

A source explains, “Maddox would be amazing in the part, but Brad is wary of going ‘all Will Smith with his kids. This could be a special case though, because Brad got involved in the project so early that his influence – and Maddox’s — are really felt across the board on this thing.There are panels that even use some signature Maddox facial expressions!”

The source also adds that Brad is actually keen on getting the project off the ground soon, adding, “This is the next movie Brad wants to produce and he even has financing lined up from his deal with India’s Reliance to make this thing. Maddox could be playing the part within 10 months or less.”

Brad Pitt, super producer. Eh, I don’t know the accuracy of this report considering that Reliance’s deal with Paramount is no longer in play, and they’ve since teamed up with Dreamworks to produce films. Where’s Brad going to get the financing? Maybe from Paramount, but I don’t see the studio spending this much money just because it stars Brad Pitt’s son. I think all the studios learned their lesson that celebrity children cannot sell a vehicle by themselves with the mess that was After Earth, starring the aforementioned Jaden Smith.