Carrie Underwood And Brad Paisley Having an Affair? (PHOTO) 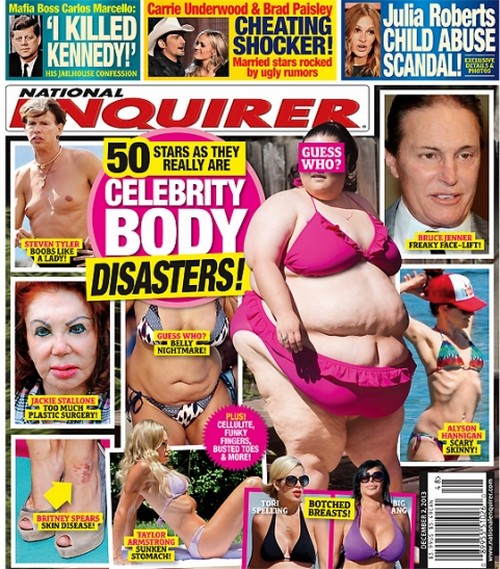 The latest cover of the National Enquirer may be exploitative, but no one can accuse them of not grabbing attention. They’ve devoted their entire front cover to an issue on ‘Celebrity Body Disasters!’, featuring some truly horrendous pictures of celebrities in bikinis. And to make the public buy the magazine, they’ve covered the faces so the viewer feels compelled to find out who the pictures are referring to. In addition to showing the ‘body disasters’, they also show focus on Tori Spelling‘s ‘botched breasts‘, Alyson Hannigan being ‘scary skinny’, Bruce Jenner‘s ‘freaky face-lift‘, Steven Styler having ‘boobs like a lady’, Taylor Armstrong‘s ‘sunken stomach’, and Jackie Stallone‘s terrifying facial plastic surgery.

Half of these are ridiculous, and the other half are rehashed and well-known. I’m sure the Enquirer thought compiling them all into one massive issue would be entertaining, but it actually has the exact opposite effect.Anyway, barring that disgusting spread, there’s also a feature on Carrie Underwood and Brad Paisley possibly having an affair with each other. Both Carrie and Brad are married to other people and have been with their respective partners for a few years, and it would be quite a shocker to find out that the two country music super stars have been cheating on their spouses. Of course, there’s little evidence to back up this claim and it is the Enquirer – but then again, there have been rumors of Carrie cheating on her husband for a few months now, and it wouldn’t be completely outlandish to believe that two rich and famous celebrities are having an affair.