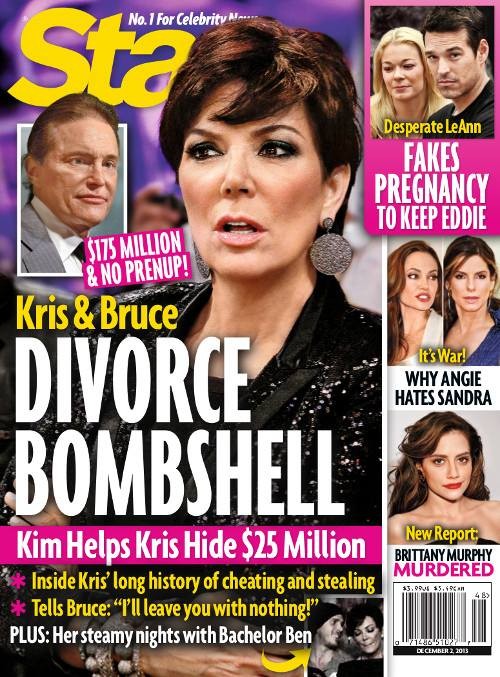 According to the latest headline from Star Magazine, Kris Jenner is hiding money from Bruce Jenner in order to protect herself during their divorce proceedings. Star’s source states that Kris is keeping almost $25 million from her estranged husband, using Kim and her other daughters to siphon the money and keep it hidden.

The source explains, “Kris and Bruce don’t have a prenup, and she’s been in a panic over losing much of their $175 million fortune to Bruce once they begin the process in the courts of getting a divorce. [Kris has been] switching as much of her own money as she can into the names of her daughters Kim, Khloe and Kourtney, to keep it in the Kardashian family. She’s already planning to transfer $25 million in Kim’s name alone — and Kim has no problem with that. She’s just as greedy as her mom!”Aww, how sweet. Like mother, like daughter. This wouldn’t surprise me at all if it was true. After all, this is the same woman who orchestrated the sale of her own daughter’s sex tape. Money is pretty much the #1 priority in her life, and she doesn’t care who she has to screw over to get it – or in this case, keep it. Besides, her relationship with Bruce is plenty fractured by now, even though they keep pretending as though they’re still on great terms. Puh-lease. She’s doing this to spite Bruce just as much she’s doing it to keep her money. You think she cares if it’s illegal? I guarantee half of what the Kardashians get up to is technically not ‘legal’, but they do it anyway.

What do you guys think of this report? Let us know your thoughts in the comments.