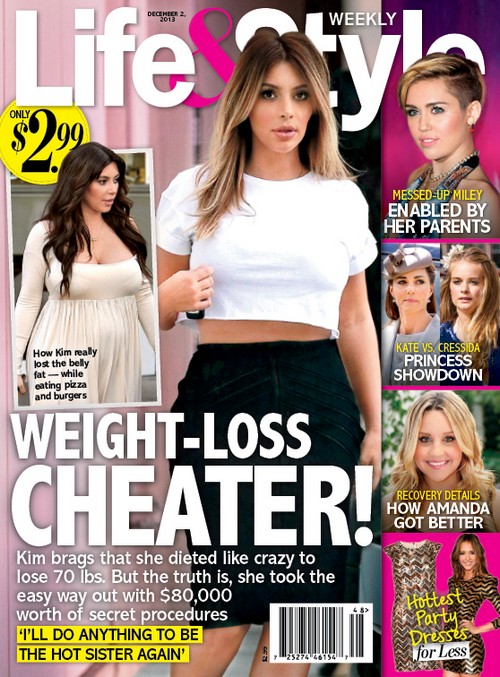 This week’s issue of Life & Style Magazine tells us something we already knew: that Kim Kardashian spent almost a $100,000 on her weight loss procedures.

Kim is not new to plastic surgery, and her history of going under the knife has been well documented. And as a multi-millionaire reality star, she’s used to having everything come easy to her. When has she actually had to work for money [not counting having sex on camera]? So it’s not hard to believe that she would resort to plastic surgery to lose her pregnancy weight instead of losing it the hard way – through dieting and strict exercise.

According to the report from Life & Style, Kim “brags that she dieted like crazy to lose the 70 lbs. But the truth is, she took the easy way out with $80,000 worth of secret procedures, saying that she’ll ‘do anything to be the hot sister again.'”

I doubt she phrased it exactly like that, but I’m sure it was chafing against Kim that the media was dumping on her looks and calling her a ‘whale’ when Kourtney and Khloe were getting far more attention for their looks. It’s incredibly superficial and vain, but when have the Kardashians been anything but that?

The cover also has a story on Miley Cyrus‘ messed up life, and how her screwed up parents are enabling her crazy partying and out of control behavior. Then, there’s a ‘princess showdown’ between Cressida Bonas and Kate Middleton, because apparently women can’t be friends without a feud.

And finally, there’s a report on Amanda Bynes‘ recovery, and how she finally managed to get better while in therapy and isolation.