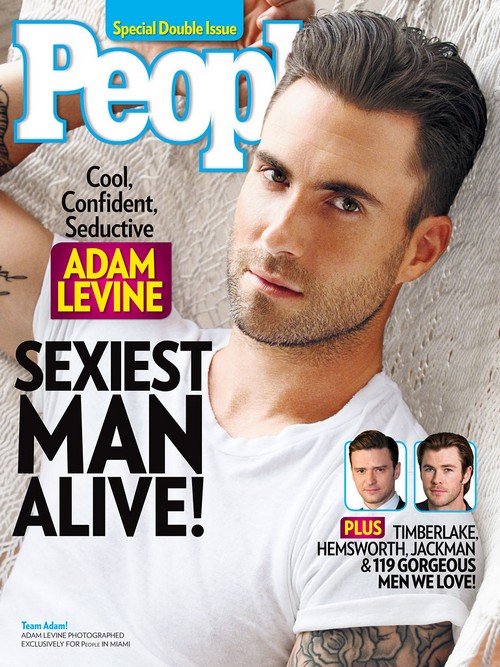 Much as several online outlets predicted last week, Adam Levine is this year’s Sexiest Man Alive for People Magazine. The annual Sexiest Men Alive issue is one of People’s highest selling issues, considering their demographic. And I don’t predict this year to be any different, although the men listed in the SMA list this year all have one thing in common: they’re willing to sell their private life to People in exchange for the honor. Look at the list – we don’t see any Brad Pitt‘s, George Clooney‘s, Leonardo DiCaprio‘s, or Ryan Gosling‘s. No, instead we get the likes of Adam Levine, Justin Timberlake, and Chris Hemsworth, all solid talents to be sure, but the celebrities that call People whenever they went the world to have an exclusive.

There’s nothing wrong with a mutual exclusive relationship with a tabloid, but remember this the next time any of them complains about privacy – and I guarantee you, J.T. will complain about it.

Anyway, Adam opens up about his engagement to Victoria’s Secret model Behati Prinsloo, which from all accounts was a surprising move on his part. He tells People, “I didn’t think marriage was for me for a long time. I was ready when I was ready. That’s about as simple as it could possibly be.”

He also says he’s really humbled by all his success, but I feel like they’re all forced to say that line. I remember hearing that exact phrase, pretty much word for word, when Bradley Cooper and Channing Tatum were crowned the SMA.

This is the first time in many, many, many years that a musician and not a movie star is crowned the SMA. Last year anointed the rise of a new movie star in Channing Tatum, and as many fans as there are of Adam Levine, it’s definitely a step down.

What do you guys think? Do you agree or disagree? Let us know your thoughts in the comments.