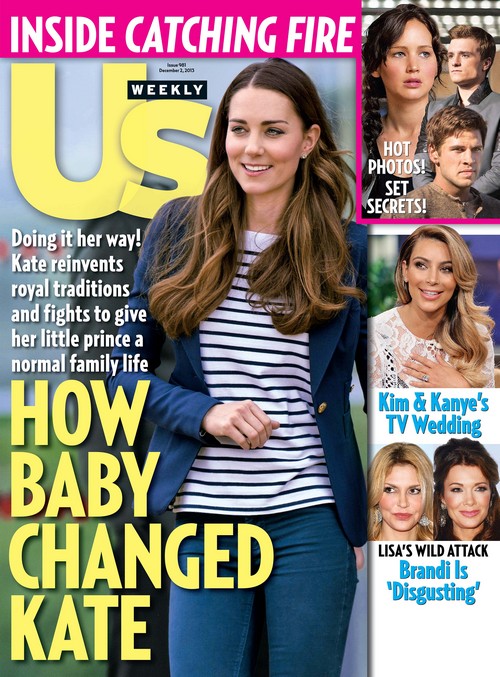 Kate Middleton is blazing a new path as the mother to the heir of the throne of England. Wow, that’s a long phrase. Anyway, US Weekly’s latest cover issue is dedicated to Kate’s battle against the royal family to protect her new baby’s privacy, and to enable Prince George to live a normal life, unlike his father and uncle. Prince William and Prince Harry were not granted the same privacy, and unfortunately, neither was Princess Diana.

But Kate has something Diana never did – her husband’s support. Prince William has also clearly been adamant about raising George away from the hoopla of the royal protocols and traditions, and both Will and Kate have been raising George in a very normal and un-royal manner.

Sure, Kate’s in-laws and most of the royal family aren’t thrilled with her reinvention of the ancient protocols. But hey, every family needs to get with the times, right? It’s about time the royals start adapting to the world around them, and stop living in the past.

US also has a feature on The Hunger Games: Catching Fire, which is set to release this weekend to record-breaking numbers. And of course, we can’t have an issue of US Weekly without the latest updates on Kim Kardashian‘s and Kanye West’s upcoming wedding, which reportedly contains details of their TV broadcast.

Finally, Lisa Vanderpump‘s attack against Brandi Glanville is thoroughly documented, all the way from the beginnings of their feud to Lisa calling Brandi ‘disgusting’. Basically, yet another reality feud with D-list celebrities who have nothing better to do.