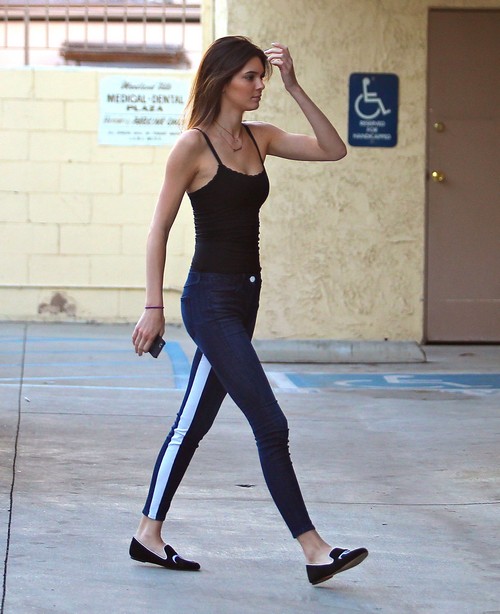 Kendall Jenner and Harry Styles have been spotted on a date, leading to a meltdown among One Direction fans. Funnily enough, there wasn’t nearly as much backlash as when Harry was dating Taylor Swift, but 1D fans are still calling for Kendall’s head.

Kendall and Harry were spotted getting dinner at Craig’s in West Hollywood on Wednesday night, and eyewitnesses claimed that the two seemed friendly during the ‘date’. Following the ‘date’, Kendall started following Harry on Instagram, which I assume is a sign in today’s world that they’re into each other? I suppose a simple phone call won’t suffice.

Of course, nobody can really confirm if Kendall and Harry are ‘dating’, hooking up, or just hanging out as friends. Smart money is on them hooking up, simply because Kendall is beautiful and exactly Harry’s type. He’s not picky when it comes to the women he hooks up with, and really, his only requirements seem to be attractiveness. He’s dated young, he’s dated old, he’s dated celebrities, and he’s dated non-celebrities. Even though Kendall’s a Kardashian family member and thereby a D-lister by association, Harry doesn’t seem to mind being seen with her.

Well, Harry never seems to mind being seen with anyone. It’s a great quality of his, and exactly what makes him way too good to be associated with the Kardashians. I wouldn’t be surprised if Kendall was the one who arranged for the paparazzi to be at Craig’s on Wednesday to get pictures of the two leaving together. Well, she certainly does learn from the best. Once a Kardashian famewhore, always a Kardashian famewhore.