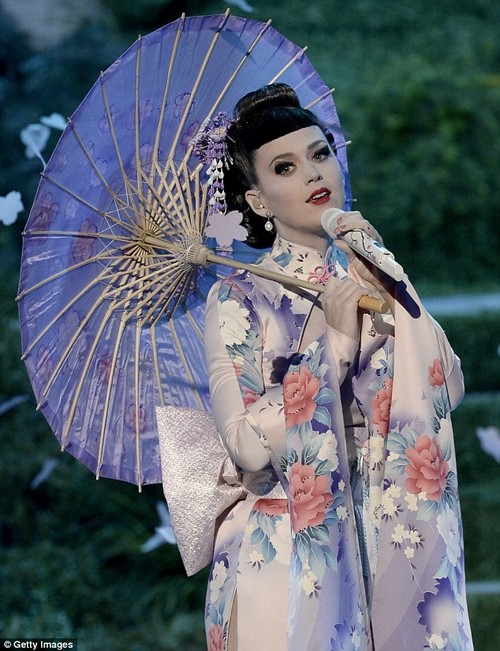 Katy Perry is being accused of racism after her AMA performance this weekend. While singing her single ‘Unconditionally’, Katy dressed up as a geisha and wore powder on her face. The powder and the traditional garb seemed to annoy a lot of people, but more so because it was associated with a song about ‘doormats’.

A blog hit out against Katy’s performance, especially for “illustrating her song about being a doormat with her fauxriental look. Perry’s whiteface/yellowface performance [was] a harsh reminder of how deeply anchored the archetype of the exotic, self-sacrificing ‘lotus blossom’ is in the Western imagination.”The Cosmopolitan Australia also had many complaints about the effectiveness of Katy’s performance, explaining, “It was the visual, boppy, awards show equivalent of saying ‘It looks like fun to be an Asian!’ without a scrap of cultural sensitivity. She pretty much just stopped short of sticky-taping her eyelids to her temples to make her eyes slant.”

Sure, Katy will claim that she’s trying to honor Asian culture, but why do it all? Singers nowadays seem to prize spectacle above all else, even at the cost of being offensive to an entire culture or religion. Selena Gomez drew similar criticism for wearing a bindi while performing ‘Come and Get it’, with many proclaiming it racist and derivative of the Indian culture. As the Atlantic states, performances like Katy’s need to be mentioned because stereotypes are still prevalent in today’s world and can be very harmful, even if that’s not the original intention.

What do you guys think? Do you think people are overreacting, or do you agree that Katy crossed a line? Let us know your thoughts in the comments.