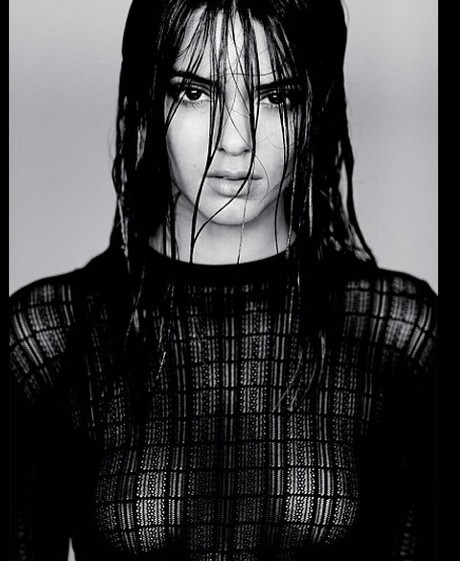 Here we go. Years after Kim Kardashian‘s debut into the world of celebrity thanks to a sex tape and her mother’s conniving machinations, Kendall Jenner‘s already ready to take her entrance. Kris Jenner is a master pimp, I’ll give her that.

Kendall turned 18 last week, and it wasn’t even a few days that passed before she started posing half-naked. She uploaded a VERY revealing modeling pic to the net, showing off her boobs and not covering much of anything. But – despite all the controversy that pic caused, it looks like it ended up landing her a modeling contract. Basically, the industry is telling young girls that showing off your boobs lands you modeling contracts in today’s world. Uckk.

Anyway, E! Online reports that Kendall has landed a contract with The Society Management, a branch of Elite World set in New York City. The group also manages huge names in the industry, including Adriana Lima and Lindsey Wixson.Not a bad gig to land for Kendall, and let’s be real here – Kris has high, high hopes for Kendall. Kim was always her first and biggest coup, but Kendall’s far more attractive and has a future at being a legitimate model and possibly even actress. I’m not saying she’s talented at all, but never underestimate the Kardashian’s game.

Also, it’s clear that they’re not going away any time soon, especially with another daughter to start pimping out to the magazines. Now that Kendall’s 18, she’s just turned fair game to the entire industry, and Kris is likely brimming with happiness. And poor us. We’re stuck with these people for another few years, at the least.

What do you guys think about Kendall landing the modeling contract? Let us know your thoughts in the comments.