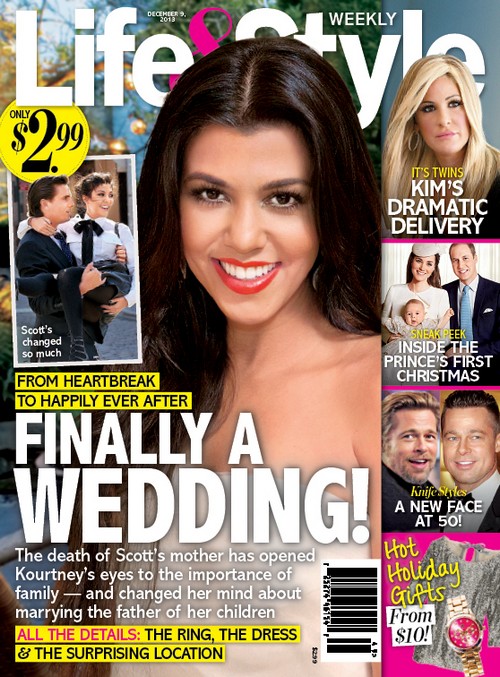 Is it finally Armageddon for Hollywood? This week, practically ever major tabloid has the Kardashians on their cover issues. WHYYYYYYY????!!!!

Well, I know why. Because apparently, people are genuinely interested in what the Kardashians do and say. But whyyyyy??!! This week’s issue of Life & Style deals with the relatively ignored members of the Kardashian family, Kourtney Kardashian and Scott Disick. According to the report, the death of Scott’s mother has ‘opened Kourtney’s eyes to the importance of family – and changed her mind about marrying the father of her children’. The source [a.k.a one of the Kardashian family members] tells Life & Style that Scott has also changed a lot since he met Kourtney, and both he and Kourtney are now on the same page regarding their future. Um – ok, but I’ll believe it when I see it.

Life & Style also has a feature on Brad Pitt‘s ever-changing face, which they humorously title ‘knife styles‘. I don’t think Brad’s necessarily gotten any major work done or gone under the knife, but he’s definitely doing something to his face. There’s a lot of plump and waxiness to it that didn’t exist a few years ago, and that definitely doesn’t come from age. But you know what? It’s Brad Pitt, and he’s one of the few people that can pull off anything, even a waxy pretend-face.

The issue also gives us a sneak peak into Prince George‘s first Christmas, which will be spent with the Queen and his family at Sandringham.

What do you guys think of this week’s stories? Let us know your thoughts in the comments.