Kendall Jenner Grows Up Too Soon 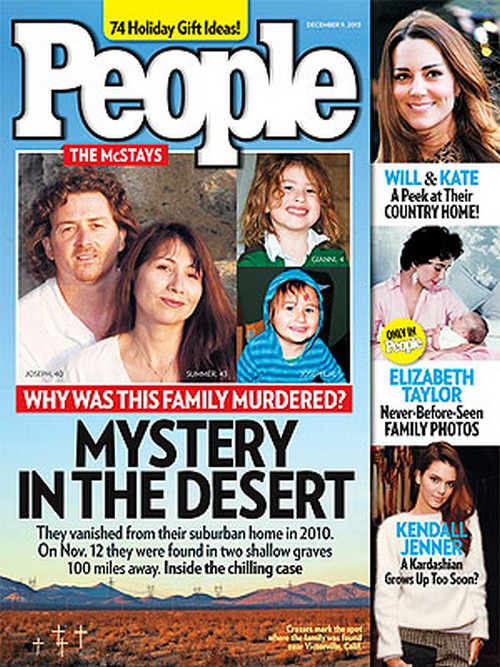 This week’s cover issue of People Magazine [one day early thanks to Thanksgiving] deals with the horrific death of the McStay family, where the bodies of the four family members were found in the California desert. The report deals with the questions of why the family was murdered in the first place, and how they went from missing to buried in graves more than a 100 miles away from where they disappeared.

As the questions are pondered, the main one seems to be, “How did four people end up here in the middle of nowhere, over 100 miles from where they live?” The case has been going on for some time, but it seems that the remaining family members will not rest until the murderers have been brought to justice, even as the chances of catching them slip away as time goes by.

One family member, Michael McStay, told People, “Investigators are questioning everybody. And they should be. We need to find the killer.”

In addition to the cover story, the issue deals with Kendall Jenner and how she’s growing up too fast. Uh, she’s a Kardashian, and that’s kind of what they do. If you look at some of the things she’s been exposed to, even before she turned 18 last week, it’s crazy that she hasn’t lost control before this. But as for her recent modeling contract and racy photos, you can probably thank her mother, Kris Jenner, for that.

There is also a special on Elizabeth Taylor, and several never-before-seen photos of her, and there’s also a sneak peak at Prince William‘s and Kate Middleton‘s country home. Oh, to be a royal and not have to worry about jobs or money.