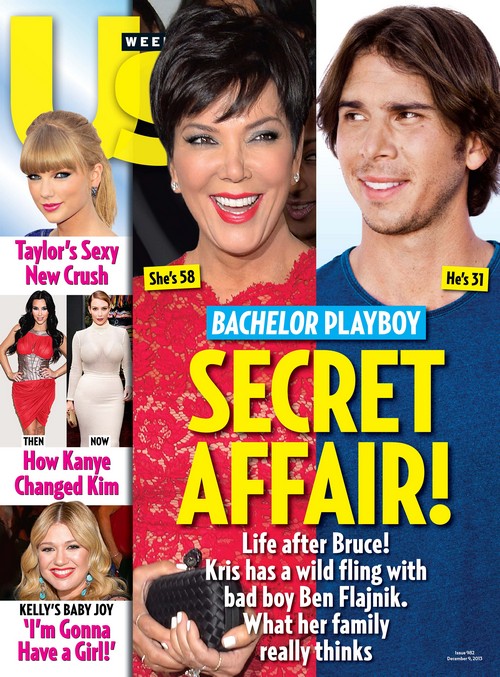 Despite Ben Flajnik [of Bachelor fame] denying any romantic connections between himself and Kris Jenner, the cat’s out of the bag. We get it, Ben. We wouldn’t want to be romantically linked to Kris Jenner either.

The latest issue of US Weekly has the scoop on Ben’s romance with Kris, and how they’re having a ‘secret affair‘. Well, not so much ‘secret’ anymore, but still an affair nonetheless. I’m guessing the age difference plays a big part [he’s 31 and she’s 58], but I think the bigger obstacle here is that he doesn’t want to publicly be seen with her. If I had to guess, I would say that she’s made some sort of agreement with him in which he benefits from her connections. Then again, he could also be using her to increase his public profile, and if that’s the case, it’s definitely worked.

There’s also a feature in US Weekly on Kelly Clarkson’s pregnancy, in which she joyfully reveals that she’s going to have a baby girl.

Also, since one Kardashian story per tabloid cover apparently isn’t enough now, US Weekly also has a cover feature on how Kanye West has apparently ‘changed‘ Kim Kardashian. They follow that up with pictures intended to show that Kim has started to cover up more and is being more modest with revealing her skin. However, I think that has less to do with how much she’s ‘changed’ and more to do with not wanting people to make fun of her weight.

There’s also a story on Taylor Swift’s new crush, which we know to be British actor Douglas Booth. Taylor’s string of British boys continues, but who knows how long this one will last?

What do you guys think of this week’s US Weekly cover? Let us know your thoughts in the comments.