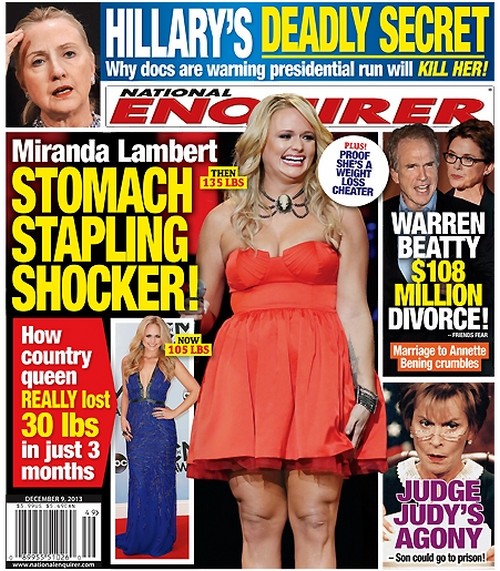 According to the latest cover issue of the National Enquirer, Miranda Lambert‘s weight loss is anything but natural. It always seemed somewhat suspect considering she lost thirty pounds in three months, but the Enquirer suggests that Miranda’s slimmed down appearance is due to a stomach stapling procedure.

Miranda allegedly used to weigh 135 pounds, and now she’s reportedly dropped down to 105 pounds. Whether it was through plastic surgery or natural methods, it’s sad that she felt that she needed to lose weight to begin with. Unfortunately, with an allegedly philandering husband and the pressure of working in Hollywood, she might have felt that she had no other choice.Is it even possible to lose 30 pounds in three months naturally? Absolutely, but it ain’t pretty. Unless Miranda worked her body to the extreme, and concentrated on nothing but that, I don’t see how she managed to do it. I mean, she has a career and other commitments, so it’s not like she could devote herself 24/7 to losing the weight. But hey, maybe I’m underestimating her commitment to ‘dieting’ and ‘exercising’.

The Enquirer also covers a story about Warren Beatty‘s and Annette Bening‘s alleged divorce, claiming that the couple’s marriage is crumbling and they’re going into a $108 divorce battle.

Also, they’re also claiming that Hillary Clinton has a ‘deadly‘ secret that she’s covering up, about how doctors have reportedly told her that she cannot run for the 2016 presidential campaign without it killing her. It’s clear the report is suggesting a mystery health problem, but we would have heard about something like that by now, right?

What do you guys think about all these reports? Let us know your thoughts in the comments.