Did Kristen Stewart And Robert Pattinson Spend Thanksgiving Together? 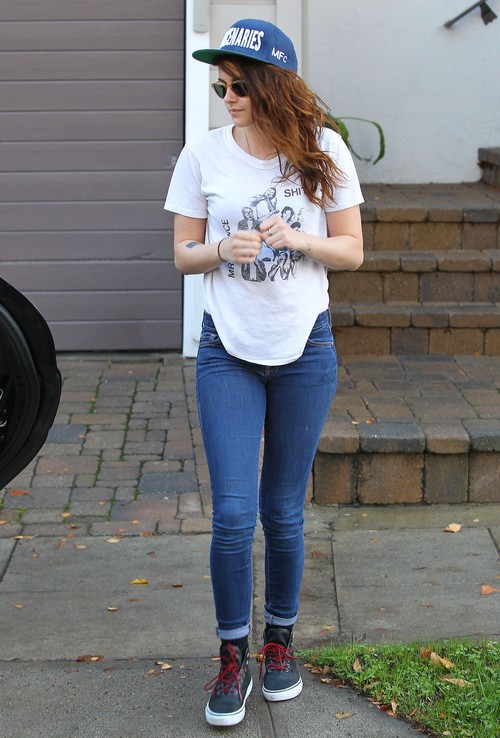 Did Kristen Stewart and Robert Pattinson spend Turkey day together? Kristen was spotted shopping before Thanksgiving with her friend, but there was no sign of Rob anywhere. But then, we have reports from Hollywood Life on how Kristen and Rob DID spend Thanksgiving together. So who to believe?

Well, let’s look at Hollywood Life’s report first. They wrote [notably BEFORE the actual event], “Kristen is going to be busy in the kitchen this Thanksgiving as she prepares a delicious, homemade meal with traditional English dishes for Rob and her family and friends. Kristen knows the way to a man’s heart is through his stomach, so she’s going all out for Rob this Thanksgiving!”They then go into excruciating detail on the imaginary details of the feast that Kristen is ‘cooking’ for Rob, including Yorkshire pudding and pies. Interesting. I suppose all these details were from Hollywood Life’s ‘source’, who is apparently a raging Twi-hard. Being realistic, ACTUAL sources say that Kristen and Rob may be hooking up, but they’re not really back at the stage where they’re spending major holidays together.

Besides, Kristen has many friends and family members in LA that she’ll likely be spending the holiday with, and Rob is busy prepping for his next movie.

What do you guys think? Do you believe that Kristen and Rob would spend Thanksgiving together? Or is it just a ploy from tabloids to gain readership? I mean, there are many reports that pander almost exclusively to the Twi-hards, and this is an example of one. That’s not to say that they won’t get together in the future, but right now, it’s not happening.