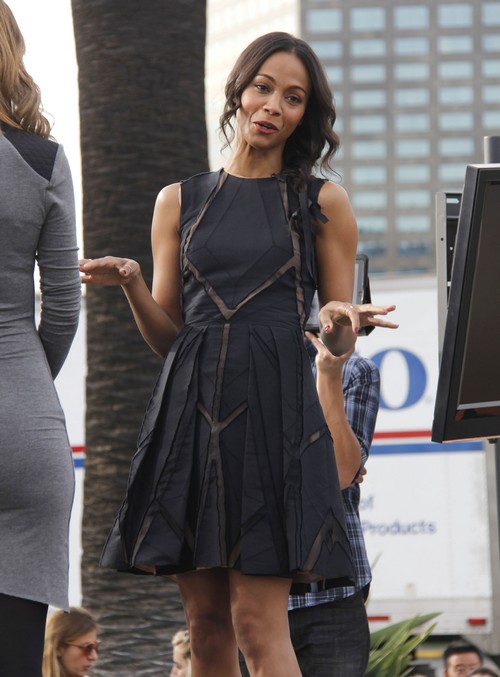 Zoe Saldana has been working steadily for the past ten years, but she hit it big with 2009’s Star Trek and 2009’s Avatar. That was the year that Zoe officially joined the A-list, and she’s probably got the best job security of any actress in Hollywood, with three major franchises. In addition to Star Trek and Avatar, she also has the upcoming Guardians of the Galaxy, and that’s not counting all of her other independent and feature ventures.

Zoe covers the latest issue of Manhattan Magazine, and she discusses the way she’s built her career over being selective. She explains, “I’m known for being selective in parts I either pick or pursue, and what matters most is that they be good female roles where the character isn’t cardboard or objectified, and where there’s real substance. No generic girlfriend or wife, and no sexy bombshell. Enough of that already!”You definitely have to applaud her for taking a stand, especially in a place like Hollywood where the roles are full of typical girlfriend and damsel in distress cliches. Since breaking out, Zoe seems to have made a concerted effort to stay away from cliched roles and rom-coms, instead doing biopics like Nina [on Nina Simone] and indies like Out of the Furnace. She’s also doing animated movies [The Book of Life] and has Blood Ties releasing soon, and Kill The Trumpet Player in pre-production.

Hopefully, with the recent success of female-driven blockbusters, the trend will start to change and the cliched wife and girlfriend roles stop, making way for roles of more substance.

What do you guys think of Zoe’s comments and career path? Let us know your thoughts in the comments.