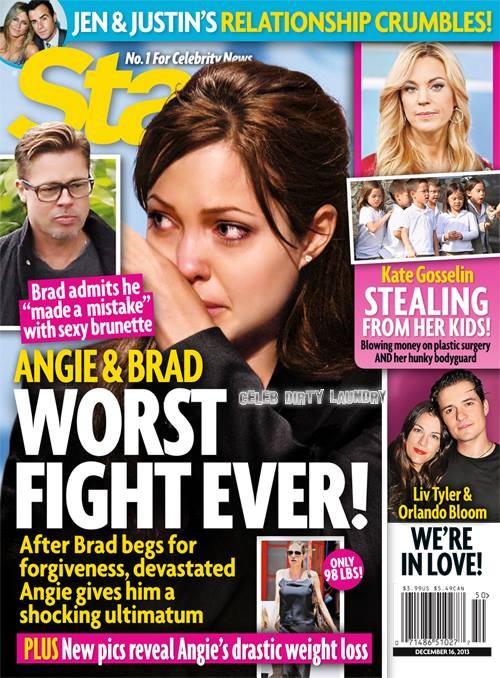 The tabloids love to create non-existent drama between Angelina Jolie and Brad Pitt, and this week is no different. Star Magazine’s cover issue this week focuses on a made up fight between Brad and Angelina, reportedly because Brad cheated on Angie with a ‘sexy brunette’. They conveniently have a ten-year old picture of Angelina crying on the cover, and make it seem as though Brad and Angelina are on the verge of breaking up.

Um, sure, whatever. Their ‘worst fight ever’ over this ridiculous cheating allegation is hilarious. The report claims that Angelina gave Brad a ‘shocking ultimatum’, which they’ll probably try to spin-off into a Jennifer Aniston story somehow. It’s also hilarious how everyone is constantly trying to link Brad to brunettes, because Angelina’s a brunette. No imagination.I hate to break it to any anti-Brangelina people out there, but the Brange ain’t breaking up any time soon. And this report is full of schlock. Brad isn’t going to cheat on Angelina, and if he ever DID, we’d hear about it from someone other than Star.

Star also has a report on Orlando Bloom‘s new girlfriend, claiming that just weeks after his divorce, he’s found love with Lord of the Rings co-star and longtime friend Liv Tyler. Both Orlando and Miranda Kerr have been linked to people literally days after their official divorce, so I think this says something about the state their marriage was in.

Finally, Kate Gosselin is reportedly stealing money from her kids, which isn’t that surprising. She’s broke and her kids have savings – so she’ll just pocket a few here and there, hoping no one will notice.

What do you guys think of this week’s Star issue? Let us know what you think in the comments.