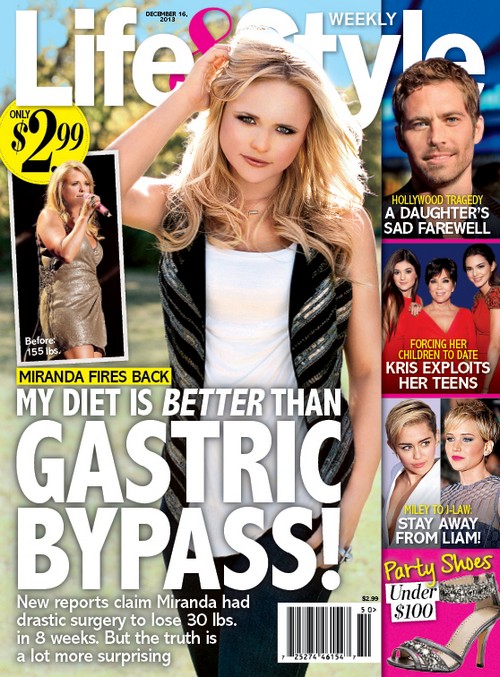 Miranda Lambert showed up at a recent awards ceremony and shocked onlookers with her drastic weight loss. She had gone from a healthy 155 pounds to almost thirty pounds less, and all within the space of eight weeks. Of course, that led to rumors and speculation about Miranda possibly having gotten plastic surgery, since it’s difficult to imagine that she lost all that weight so naturally and in such a short span of time.

Alas, Miranda is not happy with the rumors, and Life & Style claims that she’s speaking out about the truth. According to Miranda, she ‘did not have a gastric bypass surgery’, and she did not have her stomach stapled. Instead, she claims she lost her weight the old-fashioned way, through hard work, dieting, and strict exercise regimes.Now, are there any diets and exercise regimes that work that well? Sure, if you’re a celebrity, with endless amounts of time to get fit and eat right, without any monetary worries or time constraints. It’s still hard to believe, but I guess we should give her the benefit of doubt without knowing anything more. If she stays healthy, good for her.

There’s also a report on Kris Jenner, and how she’s ‘forcing’ her daughters, Kendall Jenner and Kylie Jenner, to date. We all know Kris Jenner exploits the heck out of her daughters, but I don’t think anybody needs to ‘force’ teenage girls to date. Although, I’m sure Kris did have some hand in selecting such famous boyfriends.

In addition, there’s a very stereotypical catfight story about how Miley Cyrus has threatened Jennifer Lawrence. Apparently, Miley wants Liam Hemsworth back, and she thinks Jennifer is a threat to that. Well, Jennifer has a steady boyfriend that she loves, so I don’t think Miley has anything to worry about.