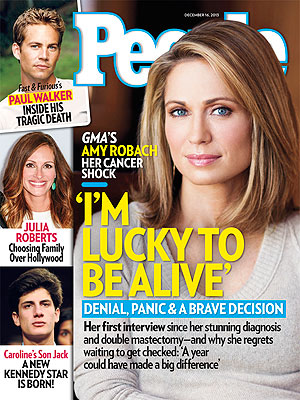 People Magazine’s latest cover issue doesn’t have as many exclusives as one would expect from People, but it nonetheless has its fair share of breaking news.

Of course, dominating the headlines this week is still Paul Walker‘s death, and I expect that to continue for some time. Paul was a major celebrity in his prime, both in his career and personal life, and his death was truly an unexpected tragedy. The report claims to ‘go inside’ his death, but all the details surrounding the tragedy seem to be constantly getting updated on TMZ, so I don’t know that People would provide us with any new information. That’s probably for the best, since his friends and family need time and privacy to grieve, and it’ll be harder for them to get that with the excessive media coverage.People also has a report on Julia Roberts choosing family over Hollywood. Really, Julia? You’ve resorted to People exclusives now? It just goes to show, it doesn’t matter how powerful the celebrity, you still need the press. In this particular case, I guess we’ll hear Julia’s explanations for why her career has taken a backseat over the past few years, and there’ll be additional pimping on behalf of August: Osage County, Julia’s first strong Oscar contender in ages.

There’s also a main feature on the cover about GMA’s Amy Robach and her cancer shock. In the accompanying interview, Amy reveals that she’s lucky to be alive, and reveals all the denial and panic that went into her decision to get a double mastectomy.