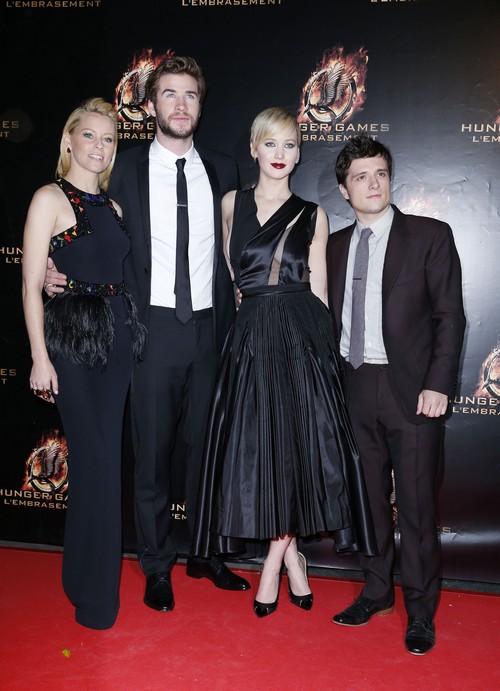 The tabloids have been trying to make a Miley Cyrus – Jennifer Lawrence feud happen for ages now. For reasons that I will never understand, Liam Hemsworth seems to be in the midst of this tabloid battle between the world-famous musician and world-famous actress.

We all know this is a load of crock, but let’s cut to the chase anyway. Life & Style reports that Miley Cyrus is ‘fuming’ over Jennifer Lawrence’s friendship with Liam Hemsworth. Oh, you mean the friendship where they act like brother and sister? Yes, we’ve seen that friendship.Apparently, Liam’s compliments regarding Jennifer during the Catching Fire press tour were like ‘daggers to Miley’s heart‘. A source tells Life & Style, “To her, his kind words feel like a personal dig. Miley has grown ‘insanely jealous’ of her ex’s relationship with Jen, since she desperately wishes that she and Liam could get back together. She feels like Liam got over everything too quickly, and she’s very insecure and jealous of Jennifer.”

Well, this directly contradicts the report that was out in US Weekly the other day, which claimed that Liam wanted Miley back. Also, anyone only has to look at the press junkets or cast interactions to discern that everyone seems to have a very brotherly-sisterly-family vibe on set. Liam Hemsworth, Jennifer Lawrence, and Josh Hutcherson will never be entangled in any romantic relationships, you can take their word for that. Also, it’s kinda Liam’s job to compliment his co-star, especially since she’s headlining the franchise that is pretty much his sole paycheck for the next two years.