Godzilla First Trailer Review: Much Better Than The Original? 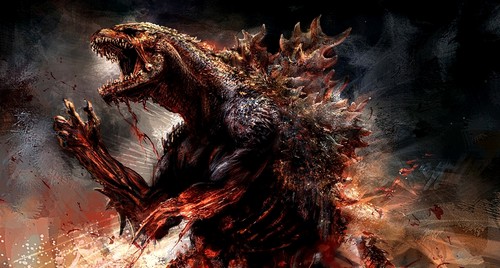 The first trailer for Godzilla has made its way online, and it’s certainly a different look to the 1998 original. For one, this actually seems to pay homage to the Japanese origins of the story, and it’s fittingly darker than the original, very campy version.

Aaron Johnson headlines the film, with the stellar supporting cast including Bryan Cranston, Juliette Binoche, Elizabeth Olsen, Ken Watanabe, and Sally Hawkins. A lot of acting power for what was initially assumed to be a throw-away popcorn movie. But from looking at this trailer, we can actually hope that there’s more substance to the story than we got with the Matthew Broderick version.

The visuals also look spectacular, but that’s to be expected. It is a Legendary Pictures film, and it is 2013. By this point, any big-budget movie with shitty CGI and special effects has absolutely no excuse and shouldn’t be released in theaters.

Now, there’s not much information released on the actual story of this Godzilla, and the trailer doesn’t do a great job of clearing that up. Granted, this is the teaser trailer, and the only job of a teaser trailer is to make you excited – in which case, job well done. But we get nothing beyond people looking scared, the military jumping into action, a few people crying, and a lot of brroom-brroom end of the world music. Let’s just hope the next trailer does a much better job of explaining the actual story and giving us a back story on any of these characters. I mean, come on, people. You don’t put Bryan Cranston in your movie and then give him 2 seconds in your trailer.