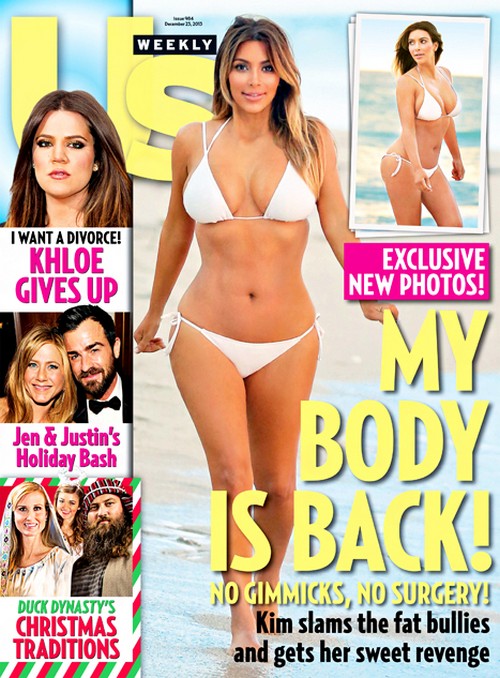 Us Weekly has become the Kardashian Weekly, and they’re living up to that with their latest cover issue. The majority of the issue is dedicated to Kim Kardashian‘s post-baby body, showcasing exclusive photos of Kim frolicking on the beach in her bikini. Apparently, Kim is ‘slamming the fat bullies and getting her revenge‘ by showing everybody how fabulous her new body is – except anyone with two eyes can see how heavily photoshopped these photos are. Experts have already weighed in on the pictures, and everyone agrees that Kim’s body has been thinned and airbrushed, almost beyond recognition. I mean, it’s extremely obvious! First of all, we’ve seen Kim in clothes as recent as last week – her thighs are not that thin, her stomach is not that flat, her arms are not that toned, and her skin is not that flawless – although that one, I suppose you can argue that makeup did the trick.It’s funny that Kim thought she could fool people with that cover, when in fact she did the exact opposite. The public ain’t stupid, and nobody’s buying Kim’s ‘revenge’.

The cover of US also had a feature on Khloe Kardashian‘s final decision to divorce Lamar Odom, after months and months of deliberation. According to the report, Khloe’s finally ‘given up‘, and has already begun the process of filing the official divorce papers.

Also, Jennifer Aniston and Justin Theroux are hitting back against the divorce rumors by throwing holiday bashes and parties. They’re not going to let the tabloids steal their thunder, not when they themselves are probably going to announce it in the new year.