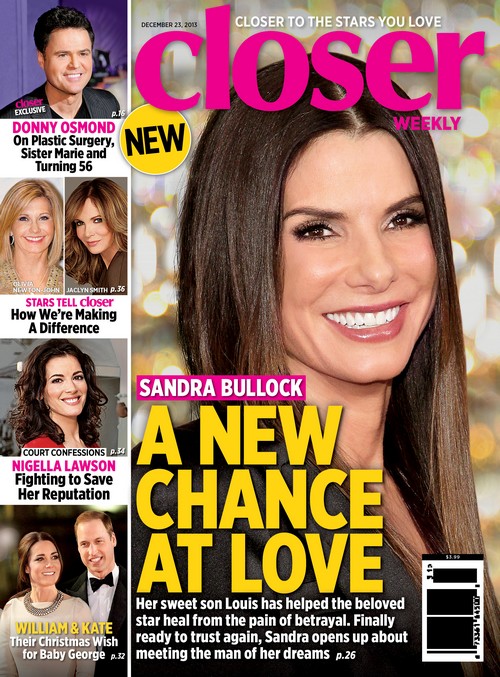 According to the latest cover issue of Closer Weekly, Sandra Bullock is finally read to move on with her romantic life after years living the single life. Sandra broke up with her cheating husband, Jesse James, back in 2010 after reports of his infidelity went public. Since then, he’s refused to own up to his own mistakes in the marriage, instead blaming it all on Sandra and claiming that he’s much happier away from her and the Hollywood scene. Well, Sandra’s finally moving on from that douchebag.

Closer claims that with the help of her young son, Louis Bullock, Sandra’s finally warming up to the idea of finding a new partner again. It’ll probably be a while before we hear anything concrete on Sandra’s new relationship, especially since she managed to keep Louis hidden despite the intense media scrutiny at the time.There’s also a featured story on Donny Osmond, and his thoughts on turning 56 years old. He looks back at his youth, and he gives advice to young stars such as Justin Bieber. He claims that every famous youngster goes through a rebellious phase, but they’ll just have to live with the consequences of their actions. Well, if that’s true, Justin’s going to learn that the hard way, what with his recent delinquent behavior.

Nigella Lawson is also reportedly making an attempt to rehabilitate her public image, although it’s not going so well at the moment. One does not admit to snorting cocaine, and then claim that they’re trying to clean up their image. It just doesn’t work that way.

And of course, what would a December tabloid issue be without a story on Prince George‘s first Christmas, spent with his loving parents, Kate Middleton and Prince William.