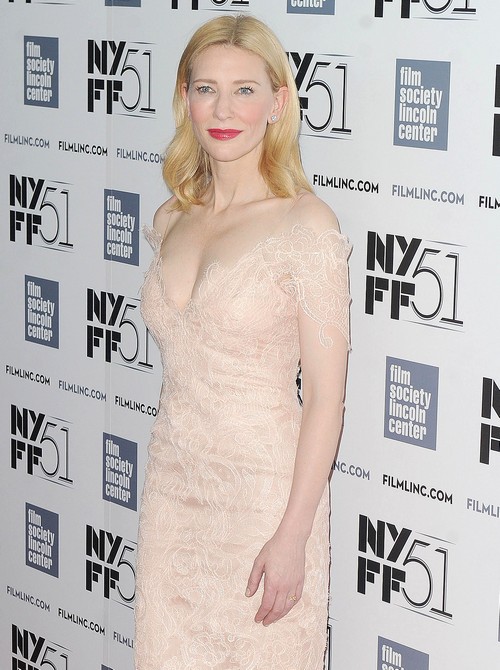 Cate Blanchett has to be one of the classiest people in Hollyweird, and she proves that time and time again. Cate covers the latest issue of Vogue Magazine and Elle Canada in honor of Blue Jasmine‘s release, for which she’s tipped as the top contender for the Best Actress Oscar.

Cate is not as ubiquitous as several other A-list actresses on screen or elsewhere, and she attributes that to her selectivity in choosing movie roles. She explains that she much prefers taking supporting roles in movies due to collaborations with directors and filmmakers, explaining, “Cinema is a different beast. You are not always able to influence the final results in the same way as you can in the theatre. So I’m not always interested in large roles onscreen. I’m more interested in making the space to keep experimenting as an actor. What’s important when you’re working on a film is that you want to work with a director who is going to collaborate with you or who is interested in what you can offer.”

And Cate’s definitely done that. In the past decade alone, she’s worked with auteur filmmakers at the top of their game, from Peter Jackson to Martin Scorsese to David Fincher and now Woody Allen. Although she’s already won a Supporting Actress Oscar, critics and Oscar prognosticators say it’s her time to win the Best Actress Oscar, and it’s long due. The competition this year is particularly tough, but that doesn’t mean much – Cate’s performance as Jasmine is so strong that it would be the frontrunner in any year, even this one.

Have you guys seen Blue Jasmine? And what do you think of Cate’s comments in Vogue? Let us know your thoughts in the comments.