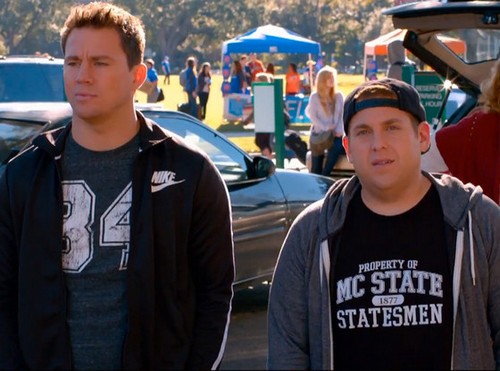 The first trailer for 22 Jump Street has gone online, and it’s filled with the infectious high energy hijinks that made the first movie such a blast of fresh air. Really, comedies over the past few years have suddenly started to become a semi-dependable genre, and 22 Jump Street looks to uphold that standard.

We really don’t get much of the plot, apart from the fact that Jonah Hill and Channing Tatum are back, and now they’re in college. Well, we don’t need much more than that. But this time, they have to face college drugs and college parties as opposed to high school drugs and high school parties. There are also some surprising guest appearances at the end of the trailer, giving us a nice reminder of the some of the craziness that went down in 21 Jump Street.

Unfortunately, one of the best parts of 21, Brie Larson, won’t be returning to reprise her role – or at least, she’s not featured in the trailer. But Ice Cube is back with his usual deadpan hilarity, with the message that Channing’s and Jonah’s characters have now moved to 22 Jump Street.

This is the red-band trailer, so Sony will probably release another green-band trailer to be shown in theaters relatively soon. In addition to Channing Tatum, Jonah Hill, and Ice Cube, the film also stars Jillian Bell, Jimmy Tatro, and Amber Stevens. The film comes out on June 13th, 2014, which is right in the prime of summer movie season. Sony seems pretty confident in this, and if it’s as good as the first one, it’ll definitely run despite the heavy summer competition.