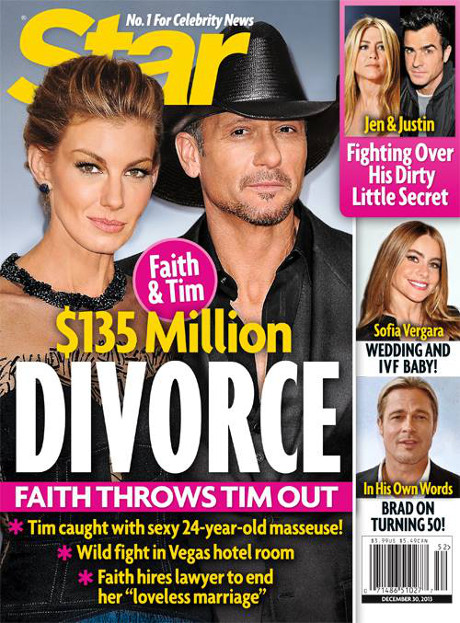 The latest cover issue of Star Magazine insinuates that Faith Hill and Tim McGraw are pretty much over. Apparently, after Tim was caught cheating with a 24-year-old masseuse, Faith decided to throw him out and end their marriage once and for all.

According to the report, they proceeded to have a ‘wild fight’ inside their Vegas hotel room, which led to Faith hiring a lawyer to help her out of their ‘loveless marriage‘.Rumors have been circulating about Faith and Tim for just about the past year, with several rumors linking Tim to Taylor Swift and practically ever other woman alive. Although Faith and Tim [finally!] hit back against the rumors several weeks ago, that’s not to say nothing’s wrong. I’m always under the impression that celebrities don’t comment on rumors without a reason, and in this case, the allegations might have hit too close to home. Either that, or Faith and Tim are just sick of false truths.

Star also has a report on Jennifer Aniston and Justin Theroux, and their rumored fighting over ‘his dirty little secret‘. Here’s another couple that’s constantly at the center of tabloid speculation, but since both of them are rumored to be spending New Year’s together in Mexico, I’ll assume that their fighting is not as bad as it sounds.

Brad Pitt is finally turning 50, which is a huge milestone for him. In the last decade, he’s gotten divorced, engaged to another woman, adopted and had six children, and became an Oscar-nominated producer. Who would have thought?

Finally, Sofia Vergara is reportedly going through an IVF treatment to have children, which wouldn’t be completely surprising.

What do you guys think of Star’s cover issue? Let us know your thoughts in the comments.