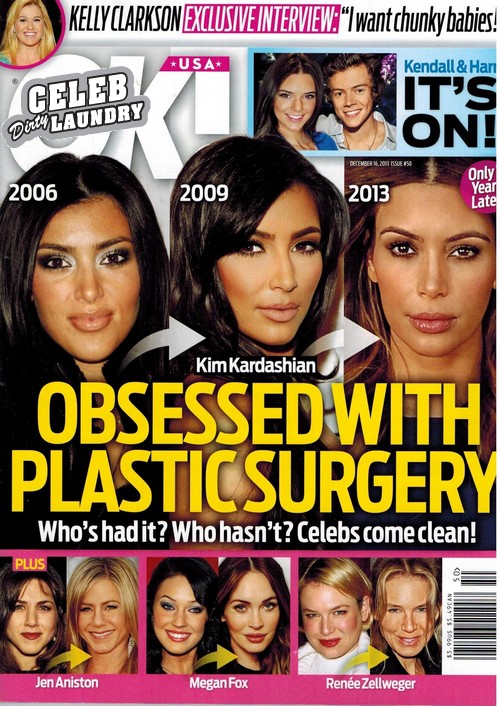 The cover features three different images of Kim over the past decade, starting from 2006 where she actually looked normal. Her features slowly changed until 2009, where she looked like a different person with a different nose, a different chin, and different cheeks. But wait, that’s nothing compared to how different she looks now, after her post-pregnancy plastic surgery. Her lips have obviously gone through filler, her nose looks sharply contoured as do her cheeks, and her entire face looks rather frozen.

They also have before and after pictures with several celebrities who have also undergone drastic plastic surgery, including Jennifer Aniston, Megan Fox, and Renee Zellweger. Now, I wouldn’t necessarily lump in Jennifer Aniston with this category, considering she’s only had nose jobs and has left the rest of her face untouched. Megan and Renee can make no such claim, and their previously beautifully and natural faces have come to resemble yet another fake and plastic L.A. face.

According to an OK! exclusive interview, Kelly Clarkson reveals her desire for her family and children, explaining that she ‘wants chunky babies’.

Also, Kendall Jenner and Harry Styles ‘are on‘, but then again, we knew that. They haven’t been quiet about hiding their relationship, whether they’re dating or just hooking up.