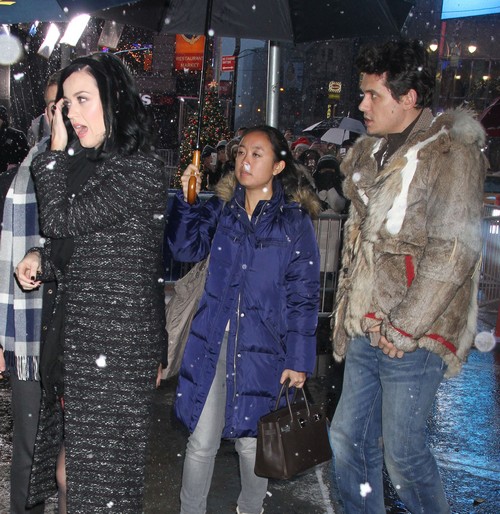 Katy Perry‘s never been one to hold back on her feelings for other people, and her disdain for Kim Kardashian clearly shines through in her latest comments. While being interviewed alongside boyfriend John Mayer on Ellen Degeneres‘ show, Katy was asked about her ‘Who You Love’ duet with John.

Ellen jokingly compares their music video to Kim Kardashian’s and Kanye West‘s infamous Bound 2 music video, to which Katy replies, “I thought our response was a little bit more authentic because my hair was blowing in the right direction.”Damn, shade. Anyone who thought that wasn’t deliberate shade, think again – John’s face after Katy’s comments say everything. Who can blame them, really? They’re constantly forced to be in Kim’s presence and they can never say anything for fear of insulting Kanye. But anyone who thinks Bound 2 isn’t absolutely terrible needs to rethink their taste.

In the same interview, Katy also discussed her relationship with John, adding, “We have a lot of fun. You know, we have music as an understanding and love between each other and we connect and you know its like he understands what I do because he does the same thing.”

Well, that’s nice, isn’t it? Even if John was a total skeezeball a few years ago, he looks like he’s finally found the one person that keeps him a little sane.

What do you guys think about Katy’s comments, both towards Kim and towards John? Was she intentionally dissing Kim via her comment about Bound 2? Let us know your thoughts in the comments.