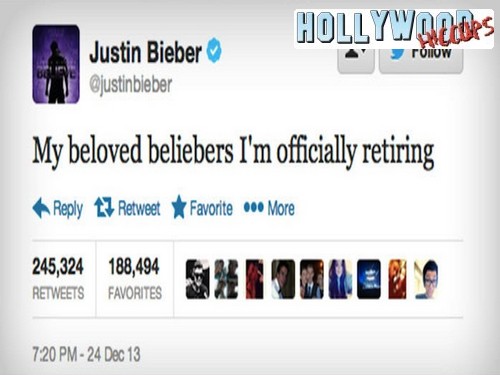 Does Justin Bieber really believe that anyone is stupid enough to believe he is retiring?  The story he is floating is that everyone is too mean to him, boo hoo so he is going to pick up his toys and take them home to his playground and not play nice anymore… 😉

What is closer to the truth is that Justin Doucher realizes that with all his latest antics, his fans won’t be running out to buy his new CD “Complete My Journals.”  SO someone in Justin’s camp – not Justin, because he is not the sharpest tool in the shed – has decided to start a big publicity campaign where Justin will start claiming he is gasp… retiring.

They hope that his fans, the Beliebers will be terrified and will run out in droves to buy the CD.  So far reviews for the album are not great.  Don’t worry Beliebers if you want to support Justin and don’t want his new crappy CD you can always go out and buy his Justin Bieber Singing Toothbrush.  It’s a steal at just $14.95.