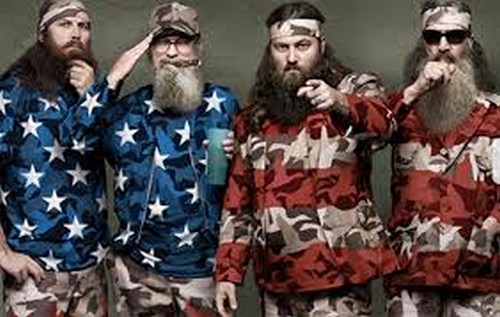 Well that did not take long!  A & E suspended Duck Dynasty‘s Phil Robertson for his remarks about homosexuality sharing similarities with bestiality.  Many people were outraged after being compared to a deviant that abuses animals.  At the time A&E released the following statement, “We are extremely disappointed to have read Phil Robertson’s comments in GQ, which are based on his own personal beliefs and are not reflected in the series Duck Dynasty,” says the network in a statement. His personal views in no way reflect those of A+E Networks, who have always been strong supporters and champions of the LGBT community. The network has placed Phil under hiatus from filming indefinitely.”

That suspension did not last long, in less than two week’s A&E has made a decision to lift Phil’s suspension and filming of Duck Dynasty will begin again in a couple of months.  Of course the reason behind A&E backing down is a no brainer, $$.  Many other networks stepped in once Phil was suspended and said they would happily pick up the show.  A&E knows they have a winner with Duck Dynasty.  I guess when money steps in a conscious goes out the door.

A&E’s official reason for lifting the suspension reads like this, “As a global media content company, A+E Networks’ core values are centered around creativity, inclusion and mutual respect. We believe it is a privilege for our brands to be invited into people’s home and we operate with a strong sense of integrity and deep commitment to these principles.”  They added, “Duck Dynasty is not a show about one man’s views. It resonates with a large audience because it is a show about family… a family that America has come to love.”

So what do you think Hiccups?  Should A&E have lifted the suspension?  Was A&E’s decision based on the almighty dollar?  Hit the comments and let us know what you think!
Continue Reading