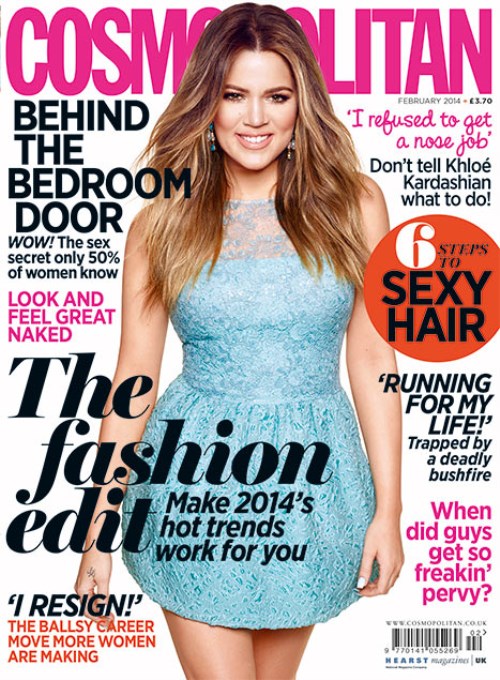 If anybody is in need of a fresh start in 2014 it definitely is Khloe Kardashian. The reality tv star is going to hope to start 2014 the exact opposite way her 2013 ended: in relationship failure and marriage breakdown. It was only two weeks ago that she filed for divorce from husband Lamar Odom and, more importantly, the restoration of her last name. Khloe is bringing k-sexy back in in the new year! We have to face the facts after all; now that Odom is no longer in the NBA and since he shamed Khloe in his rap video where he bragged about being on the “DL when Khloe’s outta town”, the ex X-Factor co-host strongly believes that that the possibilities seem a lot better without having to be bogged down by a drugged-up philandering husband.

All of that, though, pales in comparison to the treatment that this k-sister received as a 9-year-old at the hands of witch-mother Kris Jenner who, maybe not directly, said that Khloe needed a nose-job at that tender age when imperfections are barely visible. Barely, except in extreme cases. What did Kris think Khloe looked like? And that treatment is still prevalent today as proven by Kris trying to take advantage of Khloe’s marriage failure for a new tv show.

“She didn’t mean harm, but when I was around nine I overheard my mom telling her friend I needed a nose job,” said Khloe who clearly hasn’t yet listened to her mother. “I was shocked; I hadn’t even thought about it. I’ve grown into my face, but I’ve had makeup artists tell me, ‘You should get a nose job.’ I’m so happy that I never have. I’m proud for losing weight when I wanted to and I’ve never resorted to surgery. I’m not against it – one day I probably will but it would be on my terms.”

The good thing, if there ever is such a thing with a Kardashian, is that Khloe at least seems to realize that she is not perfect herself.

“I need a good fresh start; I’m excited for this year to be over with. You only live once so let’s make that one time perfect. We can’t fix our mistakes and imperfections, so let’s have fun. You get what you give out in life.” She goes on to add an even greater dose of realism: “I don’t regret anything about my life,” said the newly-single k-sister. “My life has made me who I am at this moment, and I’m very happy with who I am. No matter if it’s great, disgusting, beautiful or ugly; it happens and it makes you you. Life is about how you process things.”

It’s actually kind of eerie to read a Kardashian sounding so half-normal in an interview. The real question is what kind of person is Khloe Kardashain? Great, disgusting, beauitful, or ugly? She certainly doesn’t seem to know yet.