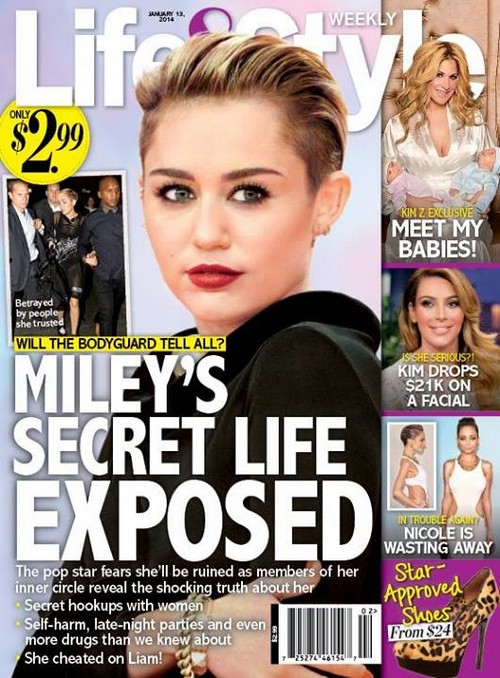 The current issue of Life & Style features the cover story, “Miley’s Secret Life Exposed.”  The magazine claims it has all the dirt on Miley Cyrus that is being exposed by a former bodyguard and her closest confidants.

Miley is said to be terrified she’ll be ruined by members of her inner circle after they reveal the shocking truth about her.  It seems Miss Miley is even worse out of the public eye.  She has secret hookups with women, “She’s been experimenting with women and even brags that she’s had threesomes.”   I wonder if she cheated on Liam while she was doing this experimenting.

Also Miley is hurting herself, she is going to late-night parties and doing more drugs than anyone thought. One bodyguard has blabbed to a magazine and now insiders are worried a Miley Cyrus Tell-All is on the way.  A source reveals, “It’s just a matter of time before one of her so-called friends attempts to sell her out.”

Nice try by L & S this week but does anyone really care about Miley’s secret life?  Probably not…