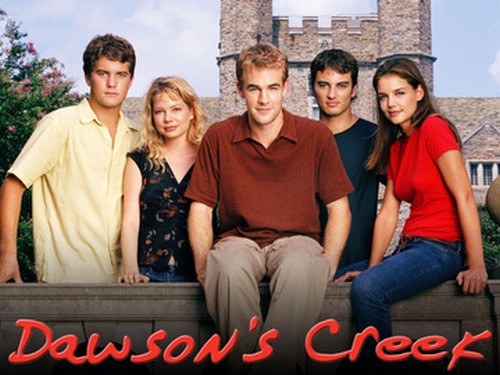 Katie Holmes’ acting career is non-existent so Katie has decided that the way to breath life into her acting career is to do a Dawson Creek reunion.  One problem, she wants to convince her former co-star Michelle Williams to hop on board, but that is not going to be an easy feat.  The two allegedly, “did not get along while the teen drama was on the air… but Katie hopes they can both put the past behind them.”

Katie hopes that getting Michelle on-board will not only see the two acting together but let them put their past behind them and let bygones be bygones.  OK! reports that, “the reunion is just as much about restoring a friendship as it is about a TV show.”  Katie is sure that since her and Michelle are single mothers they will have lots in common, unlike when they were young.

This is not the first time Katie has spoke about a reunion, in 2012 she told Jimmy Fallon, “I love everyone from the show … we have kind of talked about it here and there.  But we’re like, ‘What do you do’? Because our last episode Michelle’s character passed away … Maybe we’ll go on vacation — that will be fun — and just film it!”

What do you think Hiccuppers, would you be up for a Dawson Creek reunion.  Do you think it would help rejuvenate Katie’s career?  I highly doubt it, I saw Katie on Broadway in Dead Accounts and she was worst than bad.   The play closed early due to poor ticket sales, no surprise. Katie just cannot act and she should stick to what she does best, spending Tom Cruise’s money.