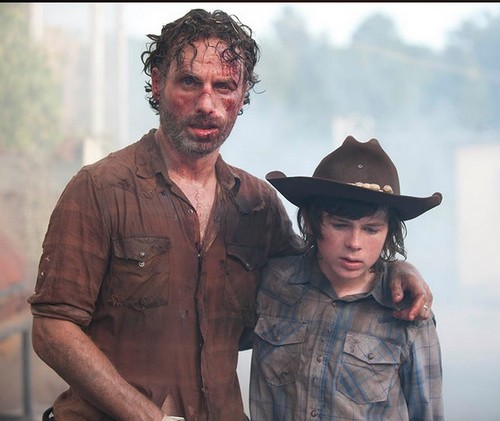 YAY!  The Walking Dead is coming back in all its gory goodness and we cannot wait.  To get us ramped up for the season 4 winter premiere TWD has released a new teaser video.

The video opens up with showing us who survived after the Governor attacked, the survivors no longer have the prison and they are not together anymore .  The video also shows us Glenn looking afraid, Daryl looking like he usually does and Carl screaming for Rick to wake up.  Is something wrong with Rick?  It looks like Carl is having trouble waking him up.

Maybe the reason Carl is having trouble waking up his Dad is because he is depressed.  Greg also revealed about Rick, “When you see them leave the prison, Rick is barely alive – another 10 seconds and Rick would’ve been done. So him watching Hershel’s death and being emotionally beaten down and physically beaten down and having bonded with Carl (Chandler Riggs) again, it’s clear that when they walk up to the baby seat and there’s blood splattered on it, there’s a reason for them to react the way that they did.”

Recently producer and director Greg Nicotero confirmed that the winter mid-season premiere will be the closest adaptation the comic book.

What do you think Hiccupers, are you as excited as I am about the mid-season premiere of The Walking Dead?