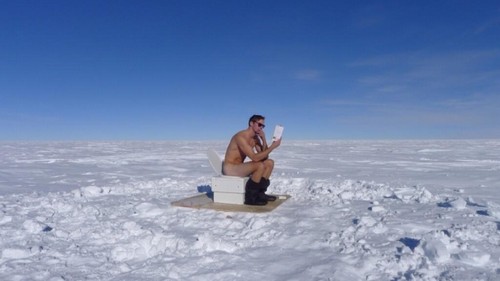 One word, YUM!  The snow is melting in the South Pole and it is not because of global warming it’s because True Blood’s Alexander Skaarsgard, the hottest man on the planet posed nude while on an expedition in the South Pole.

Alexander, Prince Harry and a group of wounded war veterans last month completed a 320-kilometre trek to the South Pole to raise money for charity as well as awareness about the sacrifices of military men and women.

Alexander’s team leader Inge Solheim posted the photo above with the message, “#southpole -30C What are you reading Alex? The script for season 7 of #trueblood HBO : -) #alexanderskarsgard,”

This is not the first time Alexander has posed naked in the snow, Alexander bared it all in the season 6 finale of True Blood.  After the episode aired fans were clamoring for more and Alexander always gives his fans what they want.