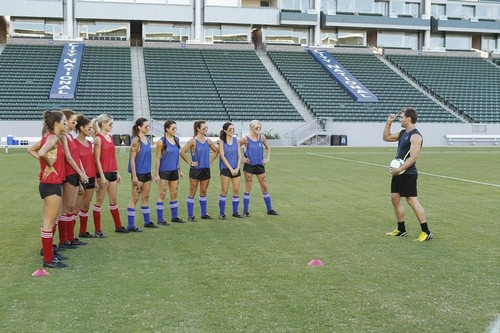 This week on The Bachelor Juan Pablo his search for his one true love continues.  Did you watch last week’s episode?  We did and we recapped it right here for you.  On this week’s show which airs January 20th, the women face-off on a soccerfield for Juan Pablo’s affection, love takes flight on the water, and one Bachelorette has an attack of an extreme anxiety.

Cassandra draws the first one-on-one date after deciding to stay and give love a chance with the dashing Juan Pablo and goes on a water adventure she won’t soon forget. Will the soccer world ever recover? A group of ten women get to share the Bachelor’s love of soccer, but when they are split into competing teams for his attention on the soccer field, the claws come out. Chelsie, who is afraid of heights, is pushed to the limit on the pivotal adrenaline date when Juan Pablo invites her to take part in a tandem bungee jump in Pasadena. The couple will be rewarded with a private concert by country music artist Billy Currington. And Juan Pablo surprises the women in the mansion by cooking them a classic Venezuelan breakfast. The jealousy between the bachelorettes grows as the Bachelor cancels the cocktail party in favor of a pool party, and the rose ceremony proves more challenging.

The youngest single mom, Cassandra, after anguishing about leaving her son behind, is rewarded with the first one-on-one date of the week. Juan Pablo takes the stunning former Detroit Pistons dancer on an oceanside ride in a super cool tricked out Jeep in Long Beach, California. But she is shocked when the Bachelor makes a sharp turn from the beach into the ocean and the vehicle is transformed into a water car. The couple spends a wonderful afternoon aboard a magnificent yacht and later, at Juan Pablo’s house, he cooks a romantic dinner for the two of them. Will sharing passionate kisses and a sexy salsa lead to Cassandra getting a rose? Or will she be sent home to be with her son?

Juan Pablo loves soccer, as the women are well aware, and now ten of them will attempt to show off their soccer skills when they arrive at the Stub Hub Center in Carson, California, the home of two-time Major League Soccer World Champions the Los Angeles Galaxy. After he demonstrates some of his signature moves while warming up with a few of the professional players, Juan Pablo splits the women into two teams and the ladies battle for his attention. But the real competition heats up at the after party when the women try to win the group date rose. Sharleen, Andi and Nikki all think their connections with the Bachelor are heating up, but are they?

The next day, Chelsie needs to face her fears as she learns her one-on-one date will be a tandem bungee jump with Juan Pablo off the Colorado Street Bridge in Pasadena, California. Will she be able to trust the Bachelor enough to take this leap of faith? Or will her fright squash the fun? Later, the traumatized bachelorette shares a romantic dinner with Juan Pablo at Pasadena’s City Hall. But to top it all off, the evening ends with the sexy couple dancing the night away to the songs of country music artist Billy Currington, who gives them a private concert. Will Chelsie need more courage to face the Bachelor’s decision on whether to give her a rose?

It’s the day of the rose ceremony, and an excited Juan Pablo heads to the mansion early in the morning to give the women a surprise. He cooks them a feast of a classic Venezuelan breakfast. But some women don’t have their “game face” on – which shakes one bachelorette’s confidence to the core. The Bachelor follows up the informal breakfast with another surprise: he is cancelling the cocktail party and putting an all-afternoon pool party in its place. The women clamor to get alone time with Juan Pablo with varying results. One woman is reduced to tears after a stressful day poolside and another emotional woman lets jealously get the better of her when she sees other bachelorettes who might have stronger connections with the Bachelor.

Juan Pablo finds it is not easy to decide who goes home, but at the end of the evening, 13 women remain  on the journey to become his soul mate and, hopefully, future wife.

Don’t forget to tune in on Monday January 20th for our live recap!