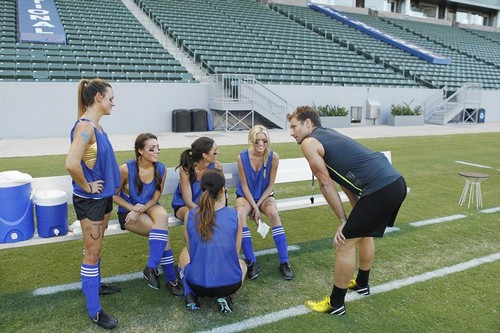 THE BACHELOR – “Episode 1803” – Juan Pablo loves soccer, as the women are well aware, and now ten of them will attempt to show off their soccer skills when they arrive at the Stub Hub Center in Carson, California, the home of two-time Major League Soccer World Champions the Los Angeles Galaxy. After he demonstrates some of his signature moves while warming up with a few of the professional players, Juan Pablo splits the women into two teams and the ladies battle for his attention. But the real competition heats up at the after party when the women try to win the group date rose. Sharleen, Andi and Nikki all think their connections with the Bachelor are heating up, but are they? – on “The Bachelor,” MONDAY, JANUARY 20 (8:00-10:01 p.m., ET), on the ABC Television Network. (ABC/Rick Rowell)
RENEE, SHARLEEN, ALLI, ANDI, CHRISTY, JUAN PABLO GALAVIS

Previous
For All The Alaskan Bush People News!