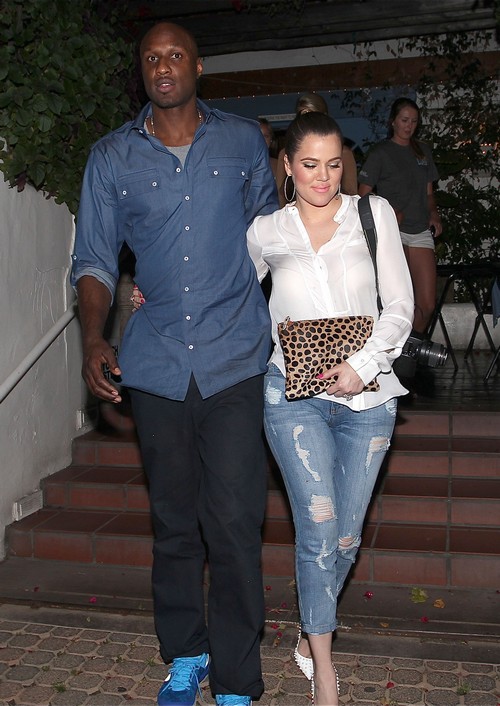 Khloe Kardashian and Lamar Odom have been officially over since last Christmas and unfortunately for them they have to watch the finals days of their marriage play out all over again for TV. The Kardashian family’s hit reality show Keeping Up with the Kardashians was filmed last summer.  We all remember last summer don’t we? It was when all of Lamar’s mistresses came out of the woodwork. So its going to be tough for the Khloe having to re-watch her marriage fall apart in front of millions of viewers. Although, and frankly someone should have mentioned this during taping, why did the couple allow the cameras to keep rolling during such a hard time? We know Lamar’s excuse, but what was Khloe’s?

The answers may surprise you. During the season premiere this last Sunday, Khloe was still making excuses about her husband’s absences to her family. That’s why the cameras were able to capture everything. If she had stopped the cameras then she had to acknowledge there was a problem.

“I’ve been in hiding because I’m afraid of people,” Khloe revealed to her sister, Kourtney, in the beginning of the episode. The last season of the show, Khloe were hinting that things were starting to break down in her marriage. “I’ve been putting myself aside to hopefully save somebody else’s life,” Khloe tells Kourtney. “And now that I’ve come to terms that I can’t, I have to move on w my life and that means changing a lot.”

I truly believe Khloe loved her husband and if it hadn’t come down between their marriage or her peace of mind; she would possibly still be with Lamar right now. So when we see a crying and depressed Khloe running after a husband that’s embarrassing her in front of an audience then we have to remember – Khloe was too busy pretending nothing was wrong for Lamar’s sake that she completely ignored how all her excuses would ultimately make her look. She just hadn’t put herself first back then.