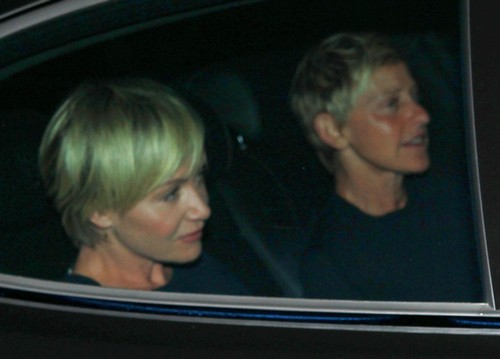 It seems that Ellen Degeneres offended at least one woman for calling a very pregnant Drew Barrymore “fat” at the People’s Choice Awards earlier this month, but it’s not Drew Barrymore who’s upset over the comment. A National Enquirer article claims Ellen’s fat joke didn’t sit too well with her wife, Portia de Rossi. The tabloid says that an “insider” reported that Portia was “in tears and lit into Ellen for being insensitive.” Enquirer’s source goes on to say, “She[Portia] screamed at Ellen, telling her that she need a better champion for women of all shapes and sizes.” Apparently, Portia just couldn’t believe that Ellen would “fat-shame a pregnant woman” and that it was “like a knife in her own back.”

This isn’t the first time the National Enquirer has made claims that Degeneres and de Rossi’s marriage is in trouble. The tabloid made claims just last year that the pair were head for splits-ville, but both de Rossi and Degeneres’ camps denied the rumors.Indeed, this story does seem a little odd. It’s no secret that Portia de Rossi DID suffer from an eating disorder years ago, but the actress has been healthy for years. It doesn’t really make a lot of sense that their marriage would be “on the rocks” over a joke Ellen made about someone else. In fact, Ellen recently surprised Portia with a very rare Land Rover Defender as a Christmas present. The lavish gift follows the hilarious Christmas card Ellen and Portia made for their friends. Ellen and Portia recreated Kanye West and Kim Kardashian’s music video for Kanye’s song “Bound 2.” In this reporter’s opinion, it seems that Ellen and Portia are doing just fine, and it’s highly doubtful that such a strong couple would let their marriage go to ruin over a fat joke.

Connie Kuykendall is an attorney, CurledCrusader on social media, and author of the Southern romantic comedies, Love Ain’t No Soap Opera and Love Ain’t No Reality Show.