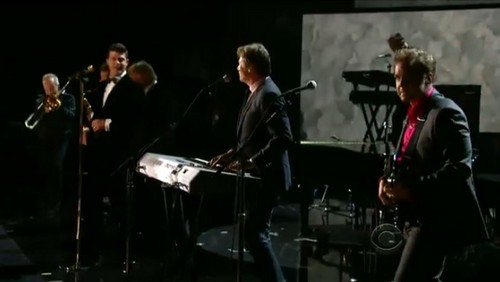 There are always great performances at the Grammy Awards but in my opinion the collaboration between Chicago and Robin Thicke was one of the best I have ever seen.

The first good thing about the performance was Miley Cyrus was not twerking 🙂  But seriously, they sang Chicago’s hit’s “Saturday In The Park” and “Does Anybody Really Know What Time It Is?”  They ended the performance with Robin’s hit Blurred Lines!  It was fantastic!

Although Chicago has won Grammy Awards in the past this was the first time they performed on the Grammy stage.  Chicago’s frontman Robert Lamm admitted they practiced for four months for the performance.  He said,  “We’ve performed all kinds of places in our long career.  To finally be on the Grammys after not being around when we won (the band was on tour) is a real thrill.”

Check out the video and let me know if you enjoyed the performance as much as I did?