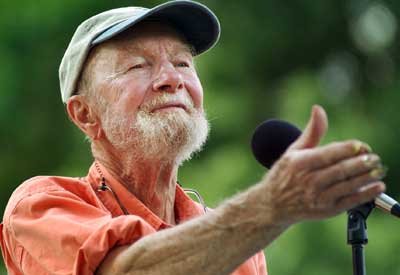 American Folk Singer and songwriter Pete Seeger died of natural causes at the age if 94 at the NewYork-Presbyterian Hospital Monday.  Pete had been in the hospital for six-days and passed away with his family besides him.  His death was confirmed by his grandson, Kitama Cahill Jackson.

Pete Seeger was one of the best loved protester in America. In the 40′s and 50′s he was a popular radio personality and performer spearheading the American Folkmusic Revival – then Pete was blacklisted for being a suspected communist during the McCarthy Era – then in the 60′s he made it back to mainstream popularity with the civil rights and anti-Vietnam war movements. And at 92 Pete marched again.