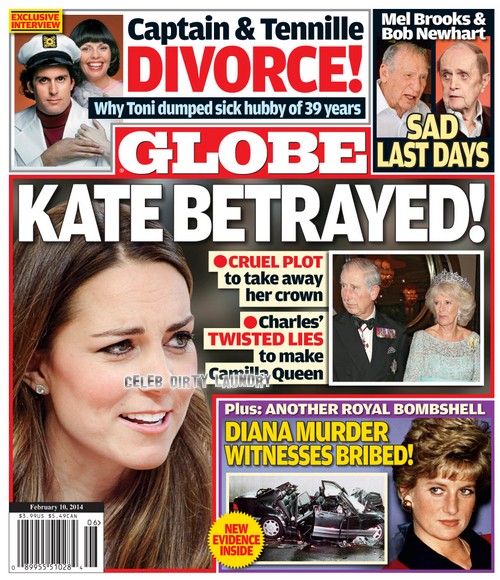 The Globe continues to show us how evil Camilla Parker Bowles, the Duchess of Cornwall is. They have and will always be staunch Princess Diana supporters. Lets face it Camilla was the other woman nearly 20 years ago and despite the fact Diana died nearly 17 years ago, people have not forgotten. Diana may be gone and Camilla has married into the royal family. Most of us still have not forgotten what Camilla did.

In their newest attempt to discredit Camilla, they once again enlisted Kate Middleton and Prince William. In their latest edition we know what the mag put in their newest edition. This time Kate and her husband were victimized by Camilla alleged “evil” plotting. According to the Feb. 10th print edition of GLOBE Magazine “Charles has started to take back some of the power that the younger royals had in an attempt to quiet his drunken wife. Part of that has included closing the Kensington Palace Press office which has done a fabulous job of promoting Kate, Prince William and Prince Harry for the last year.”

Kate is left feeling betrayed because this was aimed at affecting her likability and she can’t believe that Charles would do something so hurtful. Neither can William so tensions are boiling over behind closed doors.

Speaking of the royals, GLOBE has been following all the twists and turns of the investigation into Princess Diana’s death in the Feb. 10th issue they seem to have uncovered proof that the people’s princess was not only murdered, but that witnesses were bribed to ensure their silence.

To find out all the info, pick up the current issue of Globe Magazine on stands now.