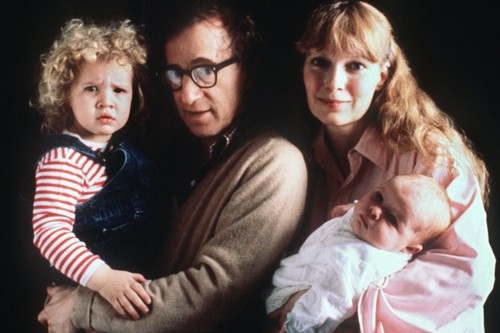 Scandal-plagued Woody Allen, 78, has been hit hard recently by his outraged ex-wife and former adopted children who want nothing to do with him.

Their indignation is understandable as Allen has been honored through tributes and praise by Hollywood recently, as is former family lives with the pain he left behind. Perhaps her brother Ronan’s courage or her adoptive mother, Mia Farrow’s, anger prompter Dylan Farrow to pen an open-letter which has been published in the New York Times detailing the horrific sexual abuse she claims to have endured under her adoptive father at the time, Woody Allen.

Dylan, now an adult, shares very specific and vivid details of the sexual activities that were forced upon her despite her attempts to get away and hide from Allen. The filmmaker has long been in the spotlight for reasons other than his Hollywood accolades. Allen actually married his former adopted daughter Soon-Yi Previn. Dylan details events from as early as 7 years  old and chastises certain actors for praising Allen despite his evil past.

Both Mia Farrow and son Ronan have made public comments about Allen’s abuse of Dylan, without specifically naming her. Now, it seems was the right time for Farrow’s daughter to finally share what has tortured her for years. Allen was investigated after Mia reported the crime upon first finding out when Dylan was a child. Prosecutors didn’t pursue it due to Dylan’s fragile state and inability to endure a trial. If you can make it through the heartbreaking and sickening letter, you’ll find it here. Though Allen remains steadfast in denying any allegations of abuse, something tells me this story isn’t over by a long shot and it’s not the kind he’ll have actors knocking on his door to be a part of. Stay tuned!