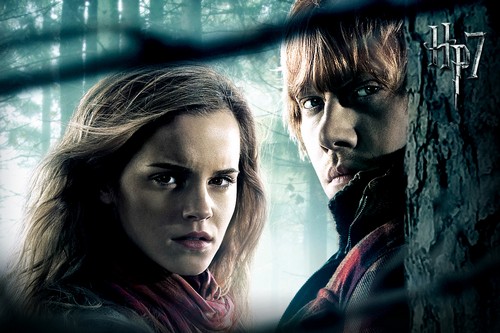 Harry Potter fans are in an uproar today, after some comments author JK Rowling made regarding the franchise in a recent interview with Wonderland magazine.  Coincidentally, Emma Watson, the star of the Harry Potter movies was the person interviewing Rowling about her book series.

A lot of Harry Potter fans were not happy with the happy ending for characters Hermione and Ron Weasley.  And, apparently JK Rowling sympathizes with them, and actually agrees that the characters shouldn’t have ended up together.

Rowling told Wonderland magazine, “I wrote the Hermione/Ron relationship as a form of wish fulfillment… For reasons that have very little to do with literature and far more to do with me clinging to the plot as I first imagined it, Hermione ended up with Ron.  Distance has given me perspective on that,” says the writer, adding, “It was a choice I made for very personal reasons, not for reasons of credibility.”  Watson apparently agreed with the Harry Potter author, she stated, “I think there are fans out there who know that too and who wonder whether Ron would have really been able to make her happy.”

Wow!  Rowling has opened up a can of worms in the Harry Potter fandom.  Fans that bashed the relationship between Hermione and Ron, are feeling triumphant that the creator of the series is supporting their opinion.  And, fans that supported Ron and Hermione’s relationship are devastated now that Rowling is stating the characters never should have ended up together.

Are you shocked by JK Rowling’s recent confession about the Harry Potter characters?  Or did you know all along that Ron and Hermione weren’t meant to be together?