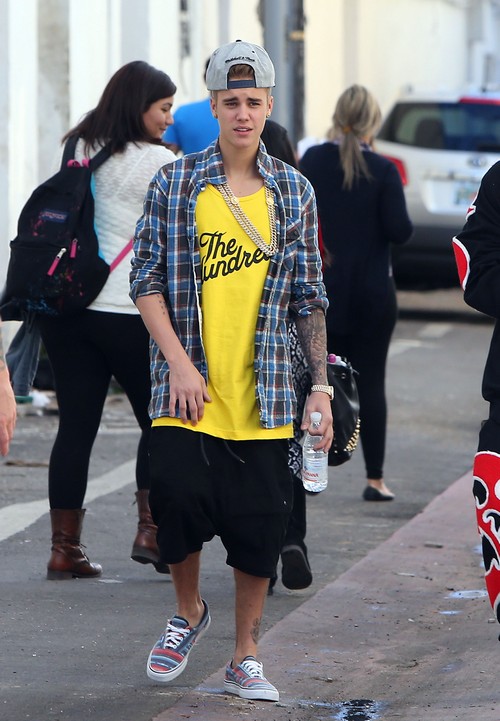 Justin Bieber has been a hot mess over the last few weeks, with headlines varying from assault, vandalism, drugs, strippers, and drag-racing.  If anyone has a sex tape featuring the infamous pop-star, now would be they opportune time to put it up on the market.  And, it looks like that is exactly what an Australian club-owner is doing.

Now, before everyone gets their panties in a bunch, we should probably clarify that it isn’t technically a sex tape.  There is no actual sex on the tape.  But, it does sound pretty dirty none the less!  And, if the tape does see the light of day it will definitely damage what little bit of a reputation Justin Bieber has left.

According to Radar Online, the owner of an Australian strip-club that Justin Bieber attended is shopping around major news networks, looking for a buyer for the Justin Bieber sex tape.  Like we said there is no actual sex on the tape, but there is thirteen minutes of surveillance camera footage of Bieber inside the strip-club.  Considering the recent photo that TMZ leaked of Bieber sucking on a stripper’s breast, we know how much Justin loves his strippers!  (Some might call it a fetish.)  According to Radar Online the tape shows Justin, “spanking strippers and pulling their panties off with his teeth.”  Gross!

We know Justin Bieber has no problems financially, so it would make sense for him to just purchase the sex tape from the strip club owner himself so that it never makes it out to the public.  But, we have a feeling Justin won’t be doing that, and for two obvious reasons.  The first being the fact that he likes all of this negative publicity, he has been trying desperately to shed his little boy image and get some “streets creds” and getting arrested and groping strippers is one way to go that.  And, the second reason being that Justin needs to save his money for his legal fees, and considering his recent string of arrests, they are probably going to be pretty hefty.

Are you shocked to hear about Justin’s latest stripper sex tape, or does nothing you read about Justin Bieber shock you these days?