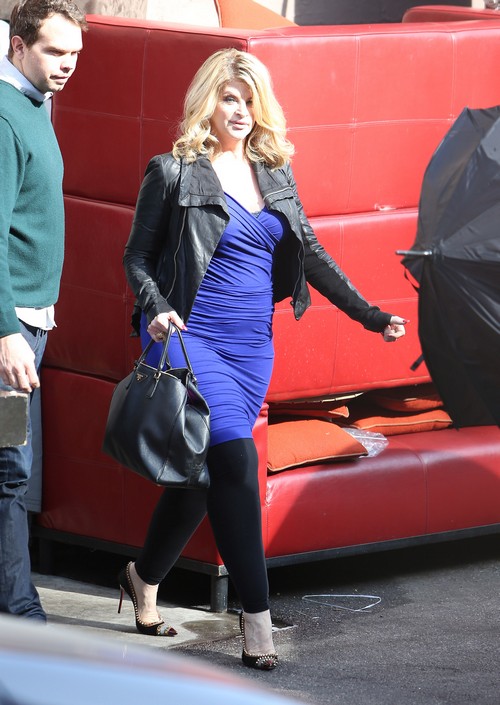 The roller coaster that is Kirstie Alley’s weight is back on the uphill climb as the actress continues to pack on the pounds and grow farther away from the figure she was so proud of after competing on Dancing with the Stars. Now, the Enquirer reports, Kirstie’s recent weight gain has friends concerned about her health, as her weight begins to hit a dangerous, unhealthy level.

The actress has long fought the battle of the bulge, but after competing on Dancing with the Stars and becoming the face of her organic weight loss company, the former Cheer’s star shed a whopping 75 pounds. She was doing well and maintaining her diet, then debuted her new show Kirstie on TVLand, and slowly the weight started coming back. Kirstie gains weight when she is stressed, and when she gets content. She just can’t seem to find a happy medium.

While she was looking much more svelte at her show’s premier in December, she has steadily kept the scale climbing with each passing week. Could the threat of her bland show being cancelled be the root of her stressful snacking? Or could it be the fiery tirade against former BFF Leah Remini, who recently quit scientology? Or, did she simply slip from her normal regimen when things started going well in her personal life?

Her show, which critics have given lackluster reviews, could soon be on its way off the TVLand schedule. Once Kirstie runs out of A-list friends to make guest appearances on her self-titled sitcom, it will surely end the show’s short run.

The Enquirer reports that Alley, 63, has completely given up on dieting. Now, friends fear that between her constant dieting and binging, causing her weight to drastically go from one extreme to another, and her horrible smoking habit, Kirstie is a heart attack waiting to happen. Let’s hope the fire between she and Remini dies down and that her show can make it for another season because after a recent 30 pound weight gain, she cannot take the stress of another career or personal nosedive.