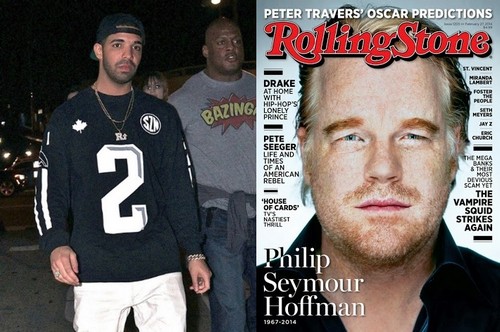 I think Rihanna must have done some serious damage to Drake’s heart and mind because he is beginning to come off as a whiny, entitled kid with no street creditability. As of late, Drake has not only managed to make himself look like a sore loser, bitter over his Grammy loss, but has now made himself look like a completely insensitive jerk as well. All in a matter of a couple days and one interview.

While Drake had a total of four Grammy nominations, he lost in four of the categories; Best Rap Song, Best Rap Performance, and Best Rap Album, to Macklemore and Ryan Lewis. Those bitter losses seem to have struck a chord in him that ended with him blurting out some sour comments about Macklemore in a recent Rolling Stone interview.  In the interview, the Canadian rapper called Macklemore’s text to Kendrick Lamar after the Grammys, “wack.”

The text Drake is referring to is one Macklemore sent to Kendrick Lamar after the Best Rap Album win. Several media outlets picked up the story after Macklemore himself posted a pic of the text to Lamar to his Instagram. “Sorry I robbed you. I wanted you to win. You should have.” Not content acknowledging his loss based on any sort of talent, Drake explained that Macklemore “made a brand of music that appealed to more people than me, Hov, Kanye and Kendrick,” then went on to say that he felt it was wrong for Macklemore to only name Kendrick. He believed he, Jay Z, and Kanye deserved that text too. Apparently he believes Macklemore is supposed to like every artist and wish they all won.  What a sweet feel-good ending, right? Perhaps they can all hold hands and sing Kumbaya afterwards as well. Get over it, Drake!

Likely Macklemore will be too busy dusting off his Grammys to notice the “wack” article featuring Drake. Drake may not fare so well with Kanye, however. It seems, as reported by Rap Dose, that there was a portion of the interview where Drake had found his backbone for a moment and went off on Kanye. Too bad for Drake, who thought his comments were “off the record,” the statements made about Kanye are in black and white and sure to be read all over!  Drake says of Yeezus, “There were some real questionable bars on there. Like that ‘Swaghili’ line? Come on man. Fabolous wouldn’t say some sh*t like that.” Should be fun to see how Drake gets out of that one when Kanye reads it. I’m sure he’ll whine and cry, or simply blame someone else. Typical activity of Drake….or your average five-year old.

To make matters even worse, Drake has had another recent tantrum, after finding out he’d no longer be on the cover of the Rolling Stone issue that he graced with an interview. Apparently he only agreed to the Rolling Stone interview on the condition he would be on the cover. When the magazine decided to replace his mug with that of Philip Seymour Hoffman, Drake let loose in typical fashion, behind a tweet.

He went on to say about the magazine’s decision, “I’m disgusted with that. RIP to Philip Seymour Hoffman. All respect due. But the press is evil.” If that is your idea of “evil” please know you have no street credibility any longer, Drake. This is by far one of the “little things” that you need to let go. Time to man up and stop acting like a little boy. Perhaps that is why you have been dumped about a dozen times by Rihanna. No one wants a whining, entitled, sore loser for a man. Well, at least you have some material for your next song.

Drake and Nicki Minaj Are No Longer Friends