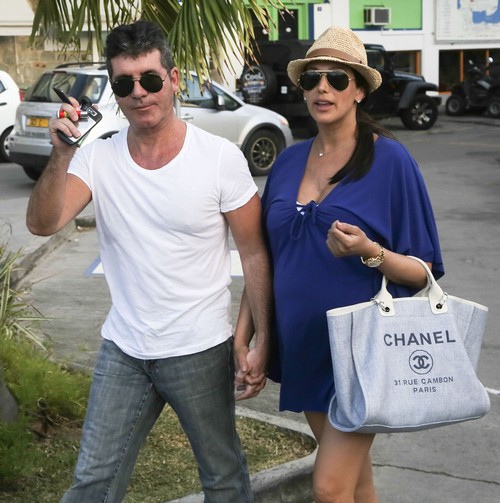 My Sweet Valentine! Simon Cowell sure had reason to celebrate Valentine’s Day this year, as he welcomed new son Eric, with girlfriend Lauren Silverman. Their son, born at 5:45 PM EST weighed 6 pounds, 7 ounces Us Magazine reported.

While the child is Cowell’s first, Lauren has son Adam, 7, with ex-husband Andrew Silverman (the one she betrayed by cheating on him with Cowell) who she divorced last year. In the most scandalous pregnancy announcement ever, it was reported while Lauren was still married to Andrew, that she was with child, only it was not her hubby’s! Shortly after the story of her affair with Cowell spread like wildfire after it was reported that Andrew walked in on Lauren and Simon in the couple’s bed. Simon, a long-time friend of the couple, didn’t offer too much in the way of an apology and is said to be so in love with Laurent that he immediately began moving forward with their relationship.

After a few tumultuous months of Lauren’s jealousy and Simon’s ego, the two have seemed to have been playing nice the past couple months and now are said to be over the moon now that new son, Eric has arrived. Socialite Lauren, a confident opportunist, had her sights set on Cowell since he travelled with she and her husband on their yacht. She and Cowell had been having an affair for quite a long time, right in front of her unsuspecting hubby Andrew. After a bitter battle over son Adam, the exes are on decent terms. It will be interesting to see whether or not Lauren pays any attention to Adam, the one she fought so hard for, as we cannot help but notice she is childless when travelling all over with Cowell. Lauren seems to be more concerned with jet-setting than with being a mom. Now that she has new son Eric, poor Adam will likely be the last thing on her mind. Let’s hope she can stop thinking of herself and stop following Simon around everywhere to feed her need for security, and be a mom for a while.