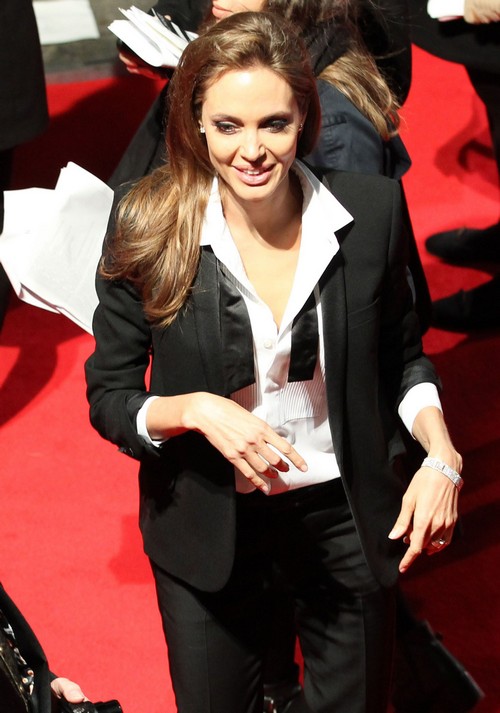 Hollywood’s royalty came out in droves last night for the BAFTA Film Awards in London.  Among the attendees was Brad Pitt and his fiancé and mother of his six children, Angelina Jolie.  The pair turned heads with their matching his and hers tuxedos, and were praised by the media and other party goers.  Angelina made a bold choice by ditching the traditional red carpet gown look, and donning black slacks and a white dress shirt to match her soon-to-be hubby’s tuxedo.  Angelina probably went home last night thinking she killed the red carpet, and then woke up this morning to find social media in an uproar over her appearance at the BAFTA Film Awards.

The general public could care less about Brad and Angelina’s matching tuxedos on the red carpet, they are more concerned with how skinny Angelina looks.  Once again the actress has found herself at the center of anorexia rumors.  People took to Twitter after the BAFTA Film Awards and voiced their concern for Jolie’s tiny thin frame, and brought up old rumors that never seem to die that the star is struggling with an eating disorder.

Angelina is no veteran when it comes to being accused of “being too skinny,” rumors have been circulating that the thin actress has been battling eating disorders for years.  She actually has stated before in interviews that she doesn’t even like being this skinny, and if she could gain weight she would in a heartbeat.

So, do you think Angelina Jolie is “too skinny?”  Do you think she is telling the truth about not being able to gain weight, or could she really have an eating disorder?  Let us know your thoughts in the comment section below!