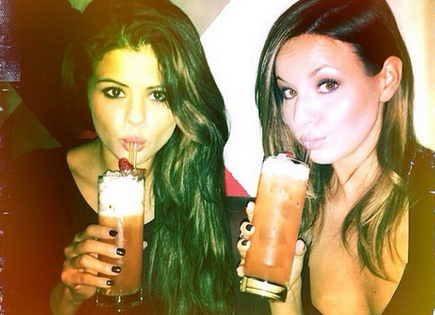 Not long after her short rehab stint, Selena Gomez was seen in pics boozing it up again.  Not only was she spotted out drinking, she was actually bold enough (or stupid enough?) to post a photo on Instagram of her imbibing with a friend.

Gomez and her cohort were pictured drinking a large cocktail, each with their own in hand, with a caption, “Extra whip cream please! Dessert before dinner. Duh.” Yes, Selena, let’s talk about “Duh” here. You post a picture publicly displaying a cocktail in your hand, bragging about drinking, only a few short weeks after ditching a 45-day rehab program  after only two weeks because you felt you had been “cured.” I’d say you should have put the “Duh” after that move!

Family and friends have grown increasingly worried about the talented young star after her umpteenth breakup with Justin Bieber and all the recent rumors about her using drugs and alcohol. It has been extremely hard on Selena because her relationship, and the downfall of it, was played out very publicly. Not only is Justin tormenting her now, he and his crew were never at a loss for any drug or prescription pill one could ask for.

Now the fight is on for the pop star’s friends and family as they fight to save her from this downward swirl she’s been on. She has been forced to grow up quite quickly, and this is a common outcome used as a coping mechanism. So, did Selena post this picture to show how grown up she is and how much fun she’s having without Biebs, or is this a cry for help?